Doctor Who: The Tenth Doctor Vol.1 by Nick Abadzis, illustrated by Elena Casagrande and Arianna Florian 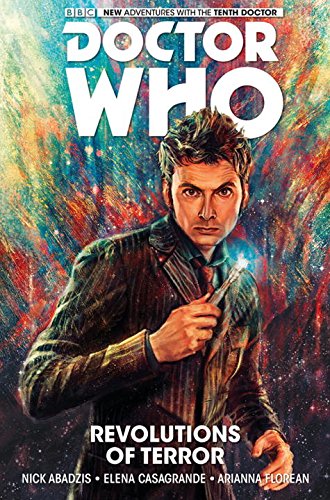 The Doctor is at it again! In the first volume of Doctor Who: The Tenth Doctor Vol.1, fans find themselves in the comforting presence of their favorite Doctor – that’s right, Ten is back and rearing for action. Readers follow the Doctor as he and a new face, Gabby Gonzalez, team up to save Brooklyn from an invasion of malicious creatures that feed on human fears known as Cerebravores. Once Gabby and the Doctor restore balance to the world, a decision must be made: will Gabby remain on planet Earth and help her father with the family business, or will she find out why that strange blue box really is bigger on the inside?

Doctor Who: The Tenth Doctor Vol.1 is a special treat for any Who fan who’s been missing David Tennant’s portrayal of the Tenth Doctor. This volume contains the first five issues of the ongoing series focusing on Ten (Titan Comics is also currently releasing stories following Eleven and Twelve, with an upcoming Eight miniseries starting in October). The comic, scripted by Nick Abadzis, is well written and thought out; it’s incredibly easy to imagine Tennant’s Doctor speaking all of his lines. Elena Casagrande does a magnificent job with the art on every page, along with Alice Zhang’s beautiful cover design.

The biggest complaint that can be mustered over the book is that it, at times, is a little too shrouded in sci-fi lingo. The fabricated logic of the aliens and science seeps a bit deeper into the dialogue than fans may wish, making the words come off a bit heavier and bogging down the story. While Doctor Who is clearly a show all about science fiction, readers may find themselves wishing for more silly Doctor antics – one of the many beloved things about Ten.

That being said, the entire volume does hearken back to a time where things in the Who-verse were far simpler. The most recently aired seasons of Doctor Who have become so focused on complex story lines and over-the-top companions, so it’s nice to have some easy, straight forward adventures. Speaking of over-the-top companions, that’s preciously what Gabby is not. She’s no souffle mystery and certainly has not birthed a Time Lord; Gabby is an average, run-of-the-mill college girl who loves art and wants to see the world. She brings back memories of Rose Tyler and Donna Noble; normal women who are still capable of extraordinary acts. Not to mention it’s refreshing to see a companion who isn’t Caucasian and has zero romantic interest in the Doctor – what a nice change of pace!

Readers unfamiliar with the source material may take time to warm up to Doctor Who: The Tenth Doctor Vol.1, but die hard Who fans will surely be all over this delectable comic and will no doubt be putting volume two on their wishlists this Christmas.