Everyone is African: How Science Explodes the Myth of Race by Daniel J. Fairbanks 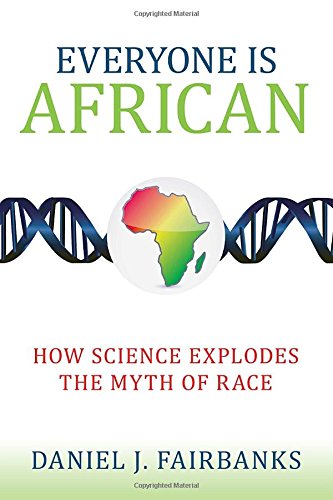 What is race? The U.S. Census, in addition to separating Hispanic classification, simplifies race into just five categories: White, Black or African American, American Indian or Alaska Native, Asian, and Native Hawaiian or Other Pacific Islander. However, race is a social construct and dependent on the interpretation of each respondent. Often, known or unknown, ancestries include a combination of these five categories. In this case, what should a person select?

According to Everyone is African: How Science Explodes the Myth of Race by Daniel J. Fairbanks, all humans originated in sub-Saharan Africa. As large numbers of people migrated across the world, genetic variants allowed for the survival of the fittest to pass on distinguishing characteristics. However, all people still have more genetic similarity than differences. Hence, race is a social construct.

The major conclusion, now supported by overwhelming evidence from both anthropology and genetics, is solid and no longer questioned by scientists: the human species originated from Africa.

Although the book is intended to focus on genetic science rather than sociology, Fairbanks does discuss some of the origins and fallacies of the concept of race. He denounces frequent counterarguments, such as The Bible, eugenics, and comparisons of human race to dog breeds. He also includes DNA sequences to show the slight differences between variations. A layman can get the gist of the argument, and it can even become a bit repetitive despite the brevity of the book, but some science background might be useful when reading about the DNA variants.

If race is a social rather than genetic construct, the belief of superiority and inferiority loses ground. While Fairbanks acknowledges that the promotion of a colorblind world is unrealistic, he believes that this science is essential for people to understand what race is and is not as the beginning of a shift toward to the eradication of erroneous perceptions. How this is to be done, he leaves for future writers, probably sociologists and politicians, to figure out.