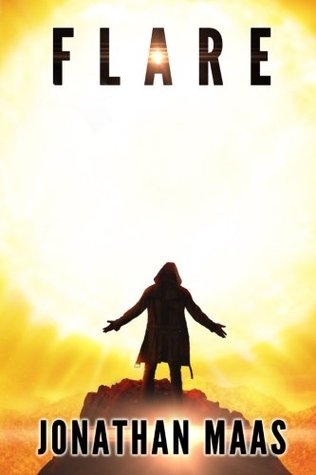 Flare, by Jonathan Maas, is a science-fiction novel about a solar flare that nearly wipes out the human race along with almost everything else on the planet. Not only does it wipe out most of humanity, but it renders a permanent threat for those left alive: going out into the sun during the daytime will kill instantly by singeing the person to a black, burnt crisp. The novel follows a variety of characters, namely Ash and Zeke – one a genius and the other a mute – as they make their way to “Salvation” (named as such for it’s supposed safety from the sun).

The novel jumps between the two POVs of the main characters and sometimes switches to lesser characters, though it is mostly the story of Ash and Zeke. The plot itself is an interesting one, and it asks what humanity would do when it comes to our ultimate demise. It’s familiar in the sense that it’s a look at what happens after the bomb goes off (or, in this case, the sun). The author lends some interesting development to Ash, occasionally setting the reader up with flashbacks that reveal his demanding father and his difficult childhood. Zeke is a more mysterious character, having survived the Flare and being completely mute; he meets up with a variety of religious types, zealots and otherwise. However, the writing is fairly sparse, and though the main characters have a cursory amount of development, there are supporting characters that get left by the wayside as they both continue on their journey.

It’s bleak, and sometimes gory, verging into horror territory that will likely have the reader asking when the zombies are going to show up. There are certain parts of this novel that likely could’ve been cut down or shortened – but the story is intriguing enough to make readers want to keep pushing forward to it’s inevitable conclusion.