Hexed: The Sisters of Witchdown by Michael Alan Nelson 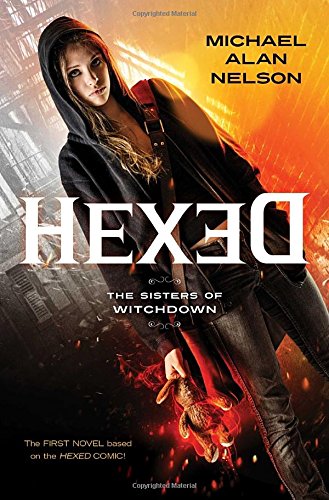 Young Luci Jenifer Inacio das Neves, or Lucifer for short, is a thief. However, she isn’t interested in the usual jewels or valuables, not unless they’re cursed or magical items. Lucifer works to keep these dangerous items out of the hands of people who would use them to harm others. Due to her familiarity with the magical underworld a policeman, whose daughter has been kidnapped through a mirror by a powerful coven of witches, approaches her. Lucifer must find some way to get into the Shade to rescue Gina before time runs out, while managing to keep several normal and uninitiated humans out of the crossfire.

The book is actually based on the graphic novel series of the same name, but the book stands up on its own. Lucifer is an interesting character, if not an easily understood one. Her attraction to David, Gina’s boyfriend, is understandable, but their budding romance while his girlfriend is trapped in the Shade and about to be murdered isn’t. It is also constantly confusing and somewhat irritating that she kept letting David tag along with her during her dangerous magical based errands when he knows absolutely nothing about what is going on.

The strongest part in this book is the magical system that has been created for this world. From using stuffed animals to trap demons, to magical crystals that can mess with video cameras, Lucifer’s thieving ways were plenty of fun to follow. Hexed is an enjoyable story for YA fans of fantasy and romance genres, if a little clichéd. While maybe not worth adding to the permanent collection, Hexed is a fast and fun diversion.