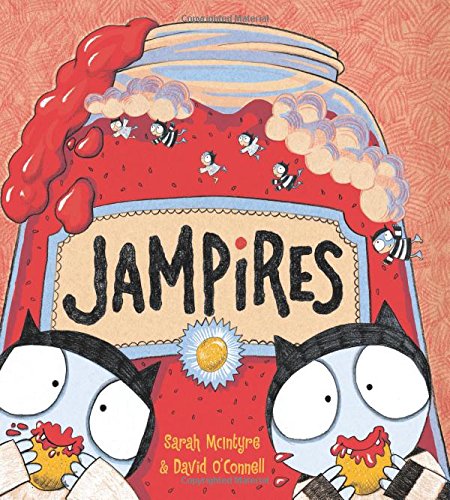 Sam is a young boy who loves jelly donuts, but one day he finds that his donut has no jam filling…and two little fang marks on it. He sets a trap to find out who could do such a thing, and he meets the Jampires. By way of apology for stealing his jam, the Jampires take Sam to their homeland, with flowers made of jam tarts and mountains made of pie, and the young Jampires’ mothers reward Sam for bringing back her children by giving him a lifetime supply of jam donuts.

Jampires is a silly story, but told with such joy that you can’t help but smile. The characters are so likable, and easy to relate to: Sam and the Jampires have believably childlike thought processes and motivations. The story is written with subtle rhyme, but with a syncopated rhythm to it, making it fun to read over and over to young listeners.

Be forewarned, also, that reading this book will most definitely make you hungry. All the treats in the Jampires’ land are illustrated deliciously, rendered in shades of blue, red, and lavender that evoke berries and cream. The illustrations throughout the book are sketchy in a way that gives a sense of motion, with dreamy colors. The text in the book bounces up and down, switching between funky fonts, also adding to the momentum and fantasyland quality of the book’s unique world. Jampires will be a book that your kids will ask to read over and over…and don’t be surprised if, after reading, they also ask for jam donuts.