Light of the Diddicoy by Eamon Loingsigh 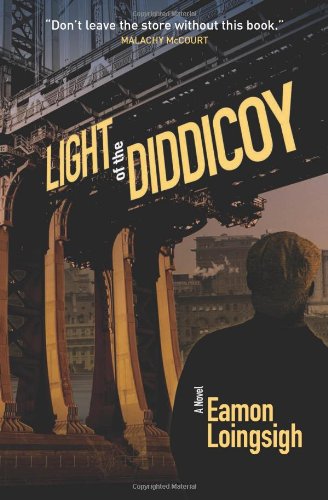 Light of the Diddicoy, part one of author Eamon Loingsigh’s Auld Irishtown Trilogy, tells the story of Liam Garrity, an immigrant from Ireland who comes to New York as a child, alone, and is forced to fend for himself on what can only be called the mean streets of Brooklyn in the early 1900s. Struggling to survive, Liam is surrounded on all sides by people who live both on the fringes of society and by their own deeply held sense of law and loyalty. Irish immigrants and their offspring who, in spite of being an ocean away from their homeland, are not a part of American society and for whom life is more dreary and desperate than history books would lead us to believe.

Loingsigh, whose own family has only been in the U.S. since the late 19th century, presents us with a brutal and heartfelt narrative of Liam’s struggles, of those of the people around him, and of the brutality and clannishness engendered by desperation and lack of choice. The story is largely violent, and certainly true to the experience of far too many who immigrated to this country in the late 19th and early 20th centuries from Ireland, and we see Liam struggle to find his place amongst the dockyard Irish gangs and thugs by whom he is surrounded.

While the violence in Light of the Diddicoy is off-putting, it is not the reason for the low rating here. Rather, something about Loingsigh’s writing style, which seems on the surface rather inoffensive, makes the reading of this novel a tedious exercise, the pages and chapters slogging by at a snail’s pace, leaving the reader begging for reprieve. What may very well be an accurate and otherwise enthralling story about Irish-American gangs in New York becomes, under the weight of this style, a chore to plow through. Add to that characters for which one feels not even a drop of sympathy and dialogue that is so dialogue-laden that it begins to feel gimmicky and you have a book that, unfortunately, falls far short of its promise and doesn’t do justice to its story – but not for lack of trying.