Race the Wild #2: the Great Reef Games by Kristin Earhart 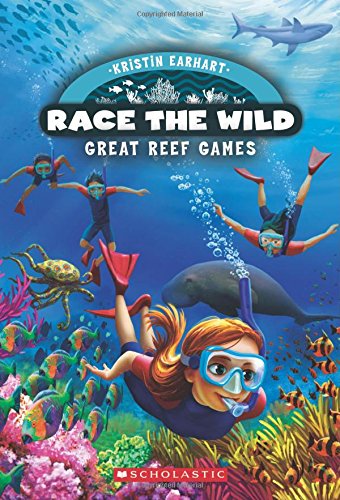 For this second book in the Race the Wild series, our heroes the Green Team travel to Australia’s Great Barrier Reef for the second leg of their race. It’s a race between teams of kids, and winning the race takes more intelligence and powers of observation than physical skill. The prize is a million dollars…and Green Team member Sage Stevens needs to win.

Each book in the series is written from the point of view of a different character, and this one is shown through the eyes of the driven – her teammates would say bossy – smart girl Sage, rather than boisterous but rules-oriented Russell from the first book. It was a pleasant change of pace in many ways, and a good choice of character to focus on, as after the first book Sage didn’t come across as the most likable character on the team, and giving her perspective on things, as well as a look into her past, shows why she acted the way she did.

The book lost some of its previous sense of the wonder of nature that we had when viewing the race through Russell’s eyes. Sage is hyper-focused on completing the race, and she doesn’t stop to describe the beauty of the reef or its creatures as often as Russell did with the rainforest, which is a pity. Sage more often turns inward to her own thoughts, which gives the book a different tone than the last one, but also takes away some of the adventure and excitement. Like the previous book, the kids don’t often seem to be in any real peril, although there is more interpersonal conflict this time, with Sage’s protectiveness over her more timid teammate Mari, and her reactions to her other teammates’ teasing and prodding her when they perceive her as being too uptight. When it is finally revealed why Sage is so driven to win, it makes sense, although it is a bit of a letdown. You do feel bad for her, especially after Russell in the previous book made her out to be the black sheep of the team and continues to make jokes at her expense.

The writing style has developed some since the first book, and some moments are genuinely touching, or genuinely funny. And there is some excitement towards the end, in the form of an encounter with a creature, an intervention from teammates, and a race to the finish. The concept of these books remains very engaging; it would be fun for elementary school readers to imagine themselves as members of the Green Team, in a high-stakes race in an exotic environment. Fans of the first book may find this book a little slower, but that may only stoke their excitement for the forthcoming installment, taking place in the Arctic.