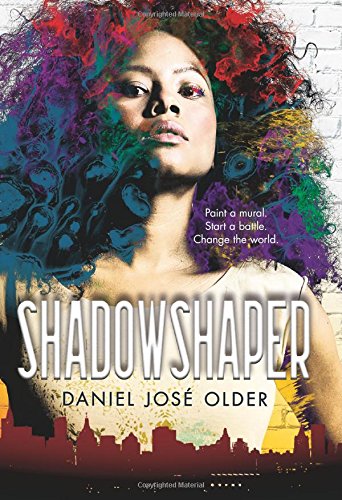 Sierra Santiago has big summer plans: get a job, hang out with her friends, and finish her mural. Her plans change, however, when she notices that another mural at her work site is fading and, even more inexplicably, crying. Curious, Sierra seeks out the help of her schoolmate Robbie. Through him, she learns about shadowshapers – people who have the power to move spirits through the arts. Sierra also discovers that she herself is from a long line of shadowshapers and also has the power to shift spirits. There’s little time to learn about it, though, before she discovers that someone is after the shadowshapers with the intent to steal their power. Sierra must discover who’s behind it and destroy them before it’s too late for shadowshapers everywhere.

Shadowshaper is a new, outstanding young adult novel by author Daniel José Older. He has created a world at once urban and magical. Sierra’s world is in Brooklyn, and the author successfully captures the energy of her city and neighborhood. It feels real and comes alive almost as its own character in the book. Sierra herself is a fantastic heroine: she is fierce, brave, and bold. While she has doubts about herself, she does not allow those doubts to overcome her. She unabashedly makes her own choices and doesn’t care what other people think of her. It’s a refreshing change in the young adult genre. Issues of race are also addressed within the book, with reference both to gentrification and to the negative impact of the belief that lighter skin is better skin. Sierra’s transition from confused teenager to powerful shadowshaper is wonderful because she never tries to deny her power or refuse it. Once she learns of it, she accepts it and acknowledges herself as powerful. She doesn’t try to minimize it or reject it, something that is seen too commonly with female characters in the genre. Shadowshaper is a fantastic book for fans of young adult fantasy or urban fantasy.