Tales from the Otherground by Joseph Nicks 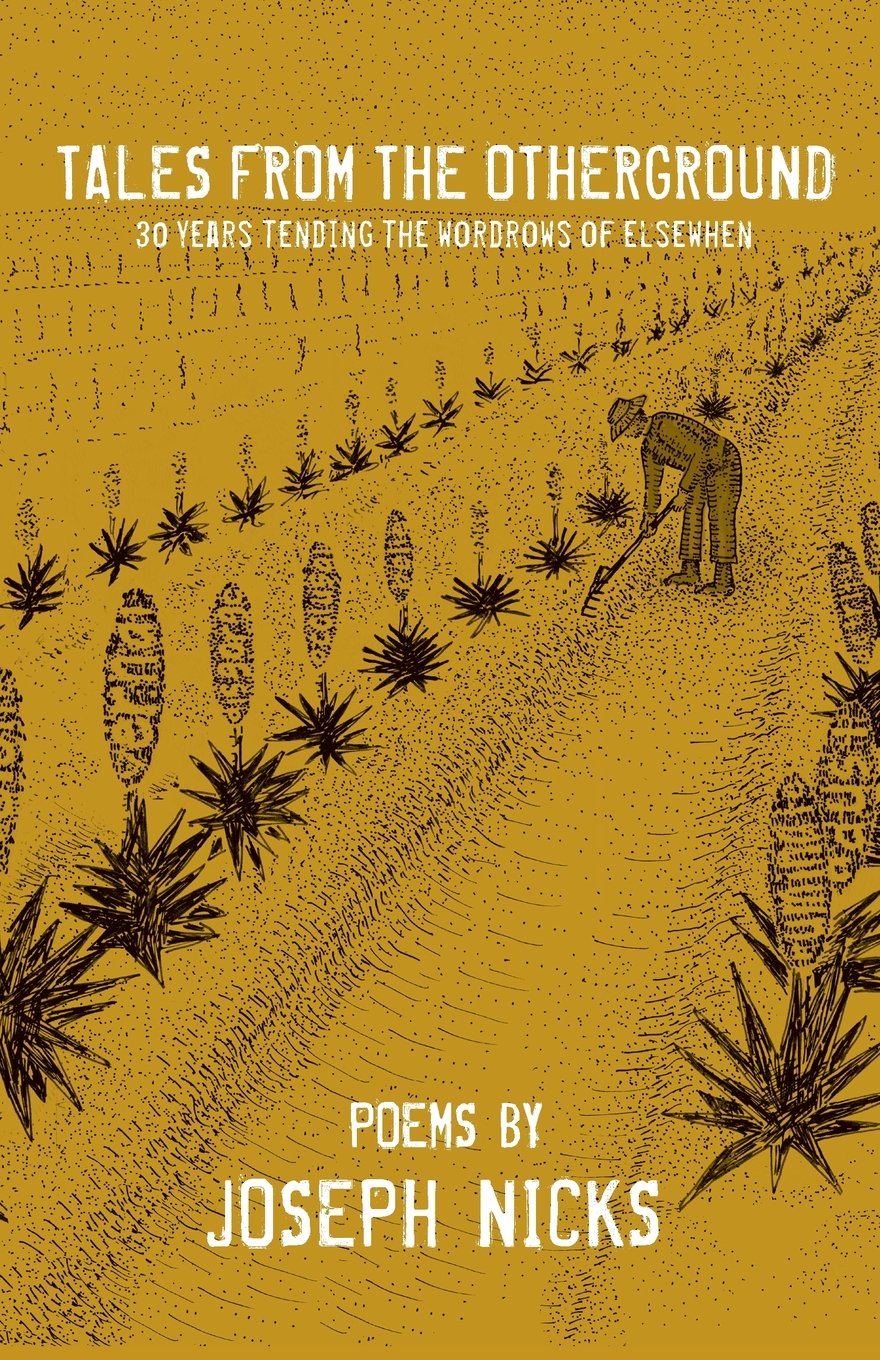 Tales from the Otherground: 30 Years Tending the Wordrows of Elsewhen is a book of over one hundred poems by Joseph Nicks. The book is broken up into five categories, and each segment contains roughly nineteen to twenty-two poems, all written in the span of 1984 through 2014. Nicks focuses on different topics in each category, ranging from nature to home life, looking back on youth to settling into old age. There’s a nostalgic, humble tone to each one of Nicks’s beautifully crafted poems. While he’s spent a lifetime crafting this book, it will only take a single read to win over the heart of any lover of poetry.

Otherground does very little wrong. While never taking itself seriously, Nicks is able to take dozens upon dozens of poems that somehow, when they come together, paint a beautiful picture of his life. The book kicks itself off with a poem called “Chromonymous” that looks at the stark moments found in art (music, film, paintings, and so on) wherein things run together. There’s a line in the piece that goes, “and if you care / to read it, / it can show you things / no colors can obscure.” This is a powerful beginning; it sets a great precedent for the rest of his poetry. This starting poem lets the reader know they are in safe hands and will surely enjoy the ride they are about to take.

As aforementioned, the book is split into five different segments. The first, entitled “Chronicide,” takes a careful look at the lives people live and the changes that can occur. The shining star of this category is “Larvalous” which has the line, “if i had a caterpillar, / i might level this whole town, / crushing cars and topping buildings, / slowly making my way home – / slowly making home my way.” The second segment is “On Things I Know Little Or Nothing About Anymore,” which presents poems that act as a retrospect. These poems look back at previous relationships, the ways in which the past touches people differently, and how the importance of words has always been evident.

“The Elusive Livingroom” is the third, which speaks of home – both in the physical sense, with family and material goods, and the figurative, where one can make a home from their writing. Home is described as a comfort, but Nicks explains how even home does not allow escape from the darkness. The fourth segment is “Omina Geaunau,” which seems to focus on the never-ending journey of man, always trudging onward and onward until the end is reached. These poems speak of the repetitiveness of both human life and the earth, and imagery of sand, sun, and desert appear frequently, which might leave the reader feeling a bit parched. The last volume of the book, “Fifth Dementia,” tells of the process of becoming old and the embrace of humans’ eventual demise. After all, everything, in the end, breaks.

Nicks’s poems all vary in style – some rhyme, others use free verse, and sometimes the occasional meter is slipped in. The poetry covers a wide array of topics and themes: growing old, death, the changing seasons, nature, humanity’s envy, the defiance of religion, and so on. Nicks’s writing is, to say the least, appealing in many ways. There are such wonderfully crafted lines in each piece, such as in “Omina Geaunau”: “there’s a town inside a town / within this anthropopolis / where indigenous is synonymous with ghost.” His writing never strives to be grandiose. There are no shivers up spines, nor punches in the gut, upon reading his work; however, everything is so elegantly written and intricately thought out that audiences will still get lost in the words. The pages are nicely formatted, all prim and proper on paper, and they read as such as well. Nicks has clearly produced a book of solid writing. Having started work on these poems thirty years ago, he must be truly satisfied with the physical payoff of his poetic endeavors – just as he should be.