The Church of Fear: Inside The Weird World of Scientology by John Sweeney 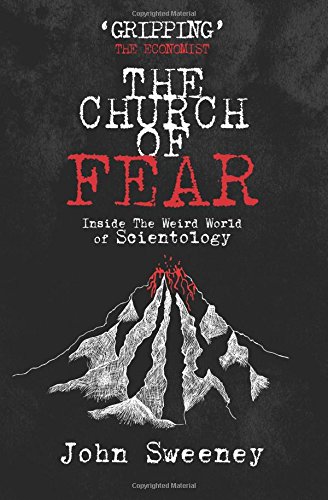 In 2007, an acclaimed investigative reporter for the BBC became an internet phenomenon in the worst way possible. No press is bad press, the saying goes, but its hard to imagine the YouTube video of reporter John Sweeney (screaming in a rage so uncontrolled it is difficult to make out his words) being something he would want going public.

It was exactly what the Church of Scientology wanted to go viral.

Sweeney had been working on a documentary about Scientology, which portrayed the group in a critical light, and the word went out among Scientologists to stop John Sweeney, to shut him down at all costs. This “snuff” effort put Sweeney through days of stress and harrowing paranoia and culminated in his mental breakdown on camera. In Church of Fear, Sweeney relives the experience, taking readers on a surreal journey that begins with a request for an interview and ends with car chases, alien gods, coded messages, and brainwashing.

The book is split between storyline (in which Sweeney recounts the bizarre dealings he has with the Scientologists) and essay (where Sweeney lays out the history and function of the Church and attempts to prove that it is a cult rather than a religion). The story is more successful than the essay. It has compelling characters and villains – such as Tommy Davies, the celebrity PR man assigned to hound the BBC crew – and the interviews with ex-Scientologists are emotional and often upsetting. Any reader will find these stories compelling and interesting, a great addition to the world of journalistic literature.

The essay is not as effective. Turning people against Scientology is not a difficult sell, and yet Church of Fear often oversells. There is a heavy sense of melodrama, seen as early as the title, which feels out of place when paired with what should be neutral facts. These facts speak for themselves: most people will not be fans of Scientology as soon as they get basic information about the group, its disturbing current leader, and the abuse which it brings to bear against its members. Readers don’t need Sweeney there, alongside every fact, pointing out how it makes the Church “spooky,” “creepy,” or exploitative.

Part of this may be the translation from page to headphone. The reader is Sweeney himself, and it is an obviously appropriate choice, but maybe not the best one. Sweeney can’t keep the vehemence out of his voice when talking about the Church, and the aggressiveness with which he reads his book can be off-putting, or at worst cast him in the same unfavorable light as the YouTube video.

It also makes it very confusing when John is engaged in dialog. In most audiobooks, the reader uses a different voice for the characters than they do for narration. As John is both the narrator and a character in his book, however, this distinction becomes muddled, and as he uses the same voice not only for himself but also for every character, it will take readers several sentences to realize when dialog has begun or ended. Worst are his frequent asides to the reader mid-conversation, which, without the help of quotation marks (or a more skilled voice actor than John is) there is no way to differentiate from the dialog itself.

Any complaint about John Sweeney’s bias against The Church of Scientology is made academic, though, by the fact that the Church is creepy, spooky, and exploitative. Its leader is an egomaniacal brute, its mission and mythology bogus, its goals dubious. The Church’s biggest defense throughout its history has been the fact that most people don’t know much more about it other than “that thing that made Tom Cruise divorce Katie Holmes.” Church of Fear is an intriguing look at the Church as an active participant in its own obfuscation and is an important expose that hopefully, because of Sweeney’s internet fame, will be widely read (and then bad press will have led to good after all).