The Line of His People Review by C.J. Adrien 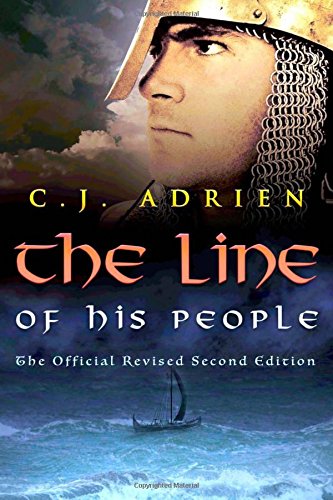 Historical fiction is something of a soft spot for me. I have always enjoyed a good story that delves into a time period that I know well or allows me to get to know a time period better than I already do. With C.J. Adrien’s The Line of His People, I was transported to the Early Middle Ages of France at the height of Viking raids on the coasts of Europe.

The main character’s name is Abriel and we start with a Viking raid on a small coastal French community centered around a monastery. Adrien does a fantastic job of describing this horrific event while still engaging the reader. After being rescued by a member of the monastic order the book skips forward ten years to show that Abriel is a monk/priest living on the mainland. In a strange turn of events, Abriel is thrown into a power struggle between his mentor and another corrupt priest. Abriel’s sent on a mission to warn the “Northman” settlement that’s sprung up on the island of his childhood. Abriel’s journey has him infiltrate into Viking society, discover the fate of his mother and family, voyage to the far north, meets the princess of his dreams, and comes to terms with his faith and his past.

Adrien’s writing style lends itself well to the historical narrative. There were many parts of the novel that were educational. It’s clear that Adrien has spent a good deal of time studying the subject to so colorfully bring it to life on the page. There are times where the history does take over the story and can interfere with the narrative but this isn’t overwhelming. Perspective also gave me a problem a few times, where suddenly it felt like the character’s voice had changed to someone else minor to the story. This was distracting and caused me to have to reread sections.

Overall Adrien’s novel is a well thought out, deeply researched, narrative that marries history with young adult fiction. In a time where females are popular among the young adult sector, this male focused novel is a welcome reprieve and appeals to a need for an action packed novel that isn’t necessarily middle grade. There is a more recent sequel to this novel and I will have to read it to learn the fates of the compelling main character and his supporting cast.