The Vencello by S. Amaranthine 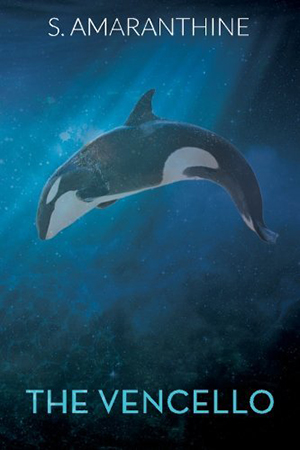 The first book of a trilogy series, The Vencello by S. Amaranthine is a Sci-fi fantasy story about the orca, Akenehi and the human, Delora and a connection that is made between them brought on by the similar tragedy of loosing their son’s on the same day. This event brings the orca and human mothers together overcoming their communication barriers and set up an unlikely friendship that could open doors to other scientific advancement and possibilities. But this friendship is viewed as a potential danger to other creatures of the ocean causing the masters of the ocean to closely watch what’s transpiring between their two enemies, but no one is prepared for what actually occurs and the actual possibility of time travel!

The whole story centers on the idea of the possibility to time travel but keeps the details on how this is supposed to occur extremely vague and leaves the reader slightly confused about the participation of specific objects with this time traveling process. Its not the official main focus of the story but is mentioned a lot, very quickly in passing.

The author writes in third person perspective and while this gives you a better overall image of the characters and the events that are taking place it makes it somewhat hard to relate emotionally how the sub-characters are feeling during an event. Liam, Delora’s boyfriend, is not really fleshed out and you have no real emotional connection with him. He feels more like a secondary support character then a main character, which the author perceives him to be. The main characters are well written and easier to relate to and it’s easier for the reader to feel more connected to them.

The chapters are long but broken up into which character the author is focusing on discussing, This helps the reader focus on where the story is taking place, whether in water or out and which group of characters the reader is to pay attention to. Sadly the character Brough, the sperm whale is possibly the most daunting part of the story to read because of the authors overly extensive, wordy description of Brough’s concern and real lack of participation with the other characters, making it somewhat hard to keep the readers attention after a while during his parts of the story. Hopefully he will have a larger part to play in the upcoming books.

Overall the story is well written and the main characters are well shaped though possibly overly floral, whimsical in description. The dialogue is smooth and natural and there are very little grammar mistakes. The author seems to have extensive knowledge on the subject matter of orca etc. The main story is pretty solid with only some minor holes in the subplots, which leaves you with questions that are not fully answered until later in the book, but this has no real impact on the main story itself.

The story The Vencello was an interesting read, which keeps the reader suspenseful as to what is really going on yet leaves a lot of questions unanswered leaving it open for the second book in this upcoming trilogy.