81 Days Below Zero: The Incredible Survival Story of a World War II Pilot in Alaska’s Frozen Wilderness by Brian Murphy 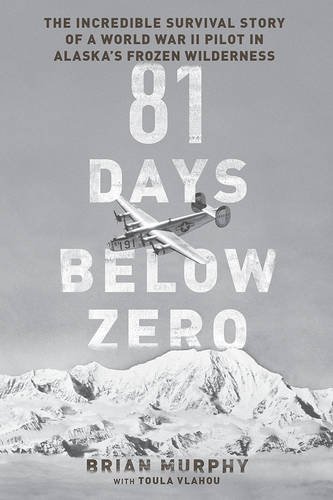 On December 21st 1943 a B-24 bomber took off from Ladd Field (now known as Fr. Wainwright) Alaska with five Army aviators on a test flight for the Cold Weather Test Detachment. They were known as the “Cold Nose Boys”, testing equipment in extreme cold. The plane never returned; only one aviator survived, 1st Lieutenant Leon Crane, the co-pilot. 81 Days Below Zero tells the story of 1Lt. Crane’s survival in the Alaskan wilderness. After parachuting from the plane and watching it crash and burn he found himself only with his cold weather uniform, a letter in his pocket from his father, some matches (40 sticks), the parachute he used to exit the plane, and a Boy Scout knife he always carried. In his efforts to survive he struggles to use good judgment based on his knowledge and cold weather training. At times he is in the depths of despair and depression making irrational decisions, which place him at significant risk and greatly endanger his life. It also becomes clear that fortuitous events/circumstances can significantly increase the likelihood of survival.

The author, Brian Murphy, was challenged in telling this story by limitations of information. 1Lt. Crane died in 2002, years before the undertaking of this book. Primary sources about Crane that were used were military interview transcripts from after Crane was found, an article written by 1Lt. Crane, and a videotaped oral history of Crane. Other sources were interviews of many interviewees including relatives, friends, a local Alaskan historian Douglas Beckstead, and others providing information about the area, the military, and cold weather survival. With these limitations present and acknowledged by the author, he attempts to convey the emotions and inner dialogue of 1Lt. Crane during his ordeal. It is a difficult task but the author has produced an exciting, caring, and interesting story of Leon Crane’s winter survival struggle.