A Passion for Paris: Romanticism and Romance in the City of Light by David Downie 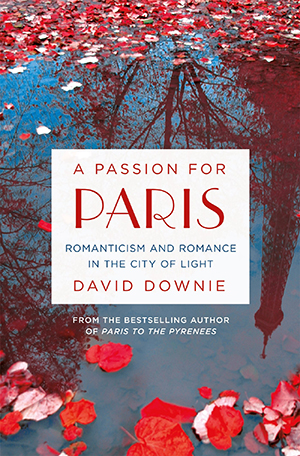 For those who found Moonlight in Paris to be an irresistible combination of Paris and literature, A Passion for Paris: Romanticism and Romance in the City of Light by David Downie will prove equally compelling. Although Downie dabbles with Hemingway, he stretches further back in history as he wanders the streets of Paris. Alexandre Dumas lounges on a sofa in a trendy salon. Victor Hugo falls in love and lust, time and time again. An older woman seduces Honoré de Balzac, Charles Baudelaire writes his momento mori, George Sand switches genders and partners as rapidly as she becomes a legend. Other players move in and out of the set.

“With the tingling sensation that Paris was Paris thanks in large part to its querulous inhabitants and bizarre culture, its literature and history, and that it might actually supply a lifetime of enigmas, pleasures, and challenges, I began a quixotic to uncover the romantic secrets of the City of Light.”

This nostalgic reverie of romantic French literature makes one yearn to fall into the sweeping novels of Madame Bovary, Les Miserables, The Three Musketeers, and so on. This book is rich with history, photos, speculation, wonder, and analysis. For lovers of French literature, this book will doubtless inspire additional book purchases.