A Patchwork of Old Spies by Gina Anding 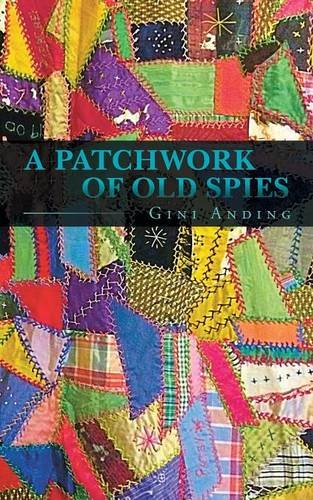 Now here is a rip-roaring good spy novel. It fits the standard definition of a ‘cozy,’ a novel sub-genre in which the action takes place in a tight and intimate community, and where violence and sex are downplayed or treated humorously. It also gives readers the opportunity to try to figure it all out by themselves, often working up to a totally unanticipated conclusion.

This ‘patchwork’ spy novel is rich in detail, clever in plot and place, smart in character development, and you’ll be surprised at how rapidly it heats up at the end.

The old spies of the story are a covey of retired espionage agents of various talents who live as neighbors on Chipley Island in Chesapeake Bay. Chipley, we are told, is “a haven for spies who have worked for various clandestine agencies” both real and imagined. The real agencies number over a dozen, each of which figures one way or another in the story. They include the CIA, FBI, DEA, DHS, FSB (former KGB), SIS (a.k.a. MI-6), Mossad, and others. The one imagined agency is the American International Center, or AIC (a clever inverse of CIA).

We meet fourteen spies altogether (including a few married couples) who, despite retirement, still rise gallantly and with wit, charm, and sharp instincts, to the cause of protecting their country when crises arise. There are also several dozen other characters in the story: neighbors, friends and allies, and supporting cast. The author provides us with lots of lists (a bit more than necessary, at times) and an Appendix to help keep some of them in order. One is a list of eight clandestine ‘operations,’ old and new, which figure large and small in the plot. Each has a catchy code name, like Seagull, Mulberry Bush, Polaris, and Patches.

Patches ― now, there’s a challenge. What are the patches of the book’s title? The answer comes, in part, from Josie Warren, one of the key characters in the plot. Early on she gives us an explanation of sorts, although the notion of ‘patches’ remains somewhat of an enigma to the end. There are lots of parts or pieces to this novel, and her “word for the pieces had always been patches, not pieces,” she says, “because a patch covers a hole or tear or rip and I saw my job as one of discovery, namely what did a particular patch hide? It’s like an heirloom patchwork quilt. There’s no diagram for one. Each piece is a different shape and color, even texture. The challenge is to make the various sizes fit together, all the while avoiding color clashes…” Well, yes. If you say so…

The author helpfully introduces some of the key characters in the book in bold font asides as they show up on the page. One character, Josie Warren, is important to the story, start to finish. Her espionage-rich background includes “former government courier and tracker; known for her accurate and vivid recall, especially of visual images, in a word her eidetic memory…” She needs those particular skills to wend her way through the book. Introductions such as hers help keep the reader tuned in to who is joining the mystery and where they’re coming from.

The author, Gini Anding, provides us with lots of information to help keep the plot lines clear – all very helpful. We see that she’s a well-published novelist, an amateur gourmet, and a poet, including the French variety. Such a rich background helps add depth of character and a bit of literary erudition to the book. It’s a good read.