Alpha God: The Psychology of Religious Violence and Oppression by Hector A. Garcia 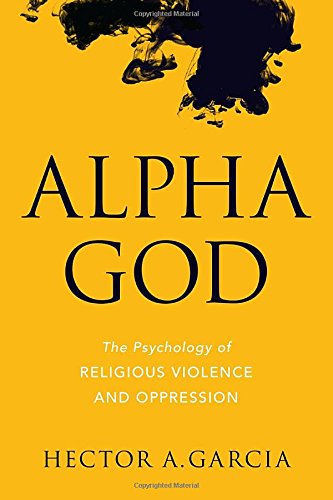 Religion has always enjoyed a good reputation for encouraging good behavior by providing us with morality and, in the end, a place in heaven if we believe and follow the rules. However, there is a darker side: an expansionist and divisive in-group, out-group dynamic that has contributed to frequent warfare throughout the centuries. One answer is that even though the Abrahamic religions – Judaism, Christianity, and Islam – are revealed by God, they are administered by men. Men with an evolutionary past that influences the direction religion takes.

Mr. Garcia begins the book by giving examples of evolutionary behaviors we share with our primate relatives, including how they are expressed in human activities and how they shape our lives. He then goes on to show how we have extended, by projection, these same characteristics to our god.

The thread running through the whole thing is the “selfish gene” syndrome, in which the only thing that matters, from an evolutionary perspective, is the amount of genetic material you pass on to posterity. This selfish gene is often expressed in the mold of the dominant male, the “big man” who gains access to nubile females through violence and intimidation. In modern times, this is more often accomplished with a large bank account and a nice car, but the aim is the same. It’s not obvious, on the face of it, but one of Mr. Garcia’s main aims for the book is, as William James once said, to make “the natural seem strange” – to evaluate our understanding in the light of new information. The book is filled to the brim with new perspectives to consider.

The book uses scripture, mostly Old Testament, to describe the behaviors ascribed to God, and how they parallel the behaviors of men driven by the selfish gene. This part drags on a bit because the examples are numerous, and it seems like each one is worse than the last. The Old Testament is really not for the squeamish.

Chapter ten is an effort to suggest solutions, such things as separation of church and state, the selective adherence to doctrine, openness, and education. The author is not confident that a solution is likely, since it will take a worldwide effort to bring results. But a solution must be found because, if Mr. Garcia is right, male competitiveness and its mirror in the church is exacerbating our sustainability problems that may shorten and brutalize our future.

It’s a great book, full of “Aha! I see it now” moments. The depth and breadth of tightly reasoned and/or documented information is persuasive. For all of that, it is a very readable book.