Destruction Was My Beatrice by Jed Rasula 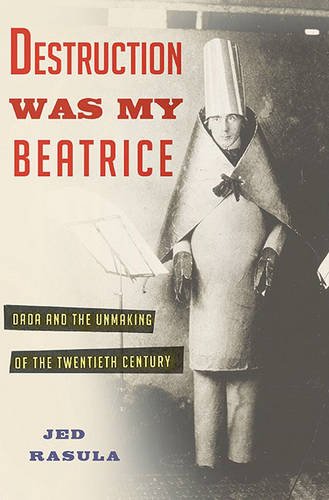 Jed Rasula’s Destruction Was My Beatrice takes on the Dada movement of the early 20th century. Rasula, a highly qualified and serious modern scholar has an interesting and slightly unusual take on Dada. Most critics and writers thinking about the movement focus on the art. Likely because Rasula is a professor of English, he does not take on the art and the artifacts in the way that many writers do. Instead, Destruction Was My Beatrice (as the title hints), focuses on the substantial literary output of the movement, with detailed attention to the poetry, journals and correspondence of the many participants and hangers-on of Dada. Rasula also focuses on the personalities and the personal conflicts of the at times touchy artists and egos involved in the movement, separating out distinct personalities and types of work that are associated with the movement.

Readers who are new to Dada, or who don’t have some background with early 20th century modern movements may easily find themselves swept away in the tide of names in the book, and even while writings like the noise poems are less controversial today, they can still be confusing to a modern audience. It is sometime hard to identify a specific author, piece of writing, or other artifact, and trace that through the tangled history of Dada, especially as the work is presented in a non-chronological order, based largely on geography. Readers who have some background in the subject, and especially art historians who are looking to broaden their viewpoint, will appreciate the inclusive nature of the text, and the fresh look at a subject and movement, which is often overshadowed by other early 20th century modern movements.