Edge of Dark by Brenda Cooper 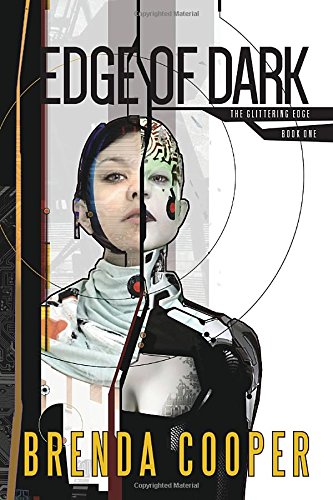 In Edge of Dark human society split ages ago into humans with only basic modifications such as cosmetic and health related tweaks, and humans that had downloaded their brains into bodies of machines. These almost-AI beings were banished beyond the edge of the solar system, with the hope that the depravation of sun and lack of resources would eradicate the abominations in the end. However, a sudden attack on High Sweet Home, a large research station out near the fringe, proves that not only were the Next not destroyed, but they have come back stronger than ever. The fate of humanity falls to three unlikely people: Nona Hall, a descendant of humanity’s hero Ruby Martin and a trained but unexperienced diplomat, Charlie Windar, a forest ranger desperate to protect the home planet of Lym and the generations of hard work put into restoring her ecological balance, and Chrystal Peterson, Nona’s best friend and a scientist working on High Sweet Home during the attack by the Next who was unwillingly transplanted into a robotic body.

While not hard science-fiction, which often focuses on technological terminology and all of the science relating to space travel, Edge of Dark does delve deeply into the debate regarding technology surrounding artificial intelligence. The book repeatedly asks the question common to the cyberpunk genre of “what defines us as human, and where do we draw the line?”

The robots of the Next are a mix of advanced AI – beings whose intelligence was created by mankind but learn and grow on their own – and the soulbots – beings whose intelligence is a direct download or copy of a human’s brain. These soulbots remember every detail of their human life, but are gifted with the processing speed of a computer. This gift of computer intelligence comes with the cost of a forced distance and a change in processing human emotions, a partial loss of our core selves. Through Chrystal, readers are able to see both her sense of horror at the change forced upon her, as well as her growing sense of wonder and acceptance. She still has thoughts and feelings, even if they are markedly different from when she was human, but her sorrow at what she lost is palpable.

Nora functions as a baseline for what humanity has become in this science-fiction future. She accepts certain levels of advanced technology such as the cessation of the aging process, and genetic manipulations that are cosmetic, such as changed or enhanced eye, skin, and hair color. She embodies the horror and fear that humanity wrestles with when the Next appear as she struggles to comprehend the newness of her friend Chrystal, and decide if this robotic soulbot does indeed still have a soul.

Charlie is old school, an environmentalist in a society where most humans have problems understanding the necessity of keeping Lym pristine, and believe that people who try to live in harmony with nature rather than bending it to their will are quaint and backwards. He also accepts certain technological advances, such as the halting of the aging process and space travel, but only so long as some semblance of balance with the natural world can be aintained. He is at home in nature, and living cooped up in a space ship or station is nearly a form of torture to him.

Through these three characters Brenda Cooper does a wonderful job of depicting different viewpoints and opinions regarding human nature and the natural order. Her book is philosophical, and an adventure in the study of human society as it is, and as it could be. Science-fiction is a genre that allows writers to really dig into the ‘what if’ mentality, and the authors often use their work to raise important questions to their readers and raise a mirror to our society – often pointing out observations we may not wish to see. With the recent advances in robotics and computer intelligence, Edge of Dark is a thoughtful and enjoyable study of where we might be headed. It also functions as a dark reminder that humans have a history of developing new ways to put one race or social class above another, and that we can’t seem to believe that anyone is equal for long.