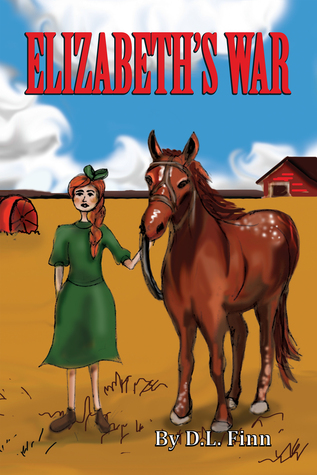 Eleven-year-old Elizabeth knows about the war going on in Europe – everyone does. However, on her family’s farm in North Dakota, it feels very far away. Elizabeth prefers to focus on playing with her best friend, Sarah, looking at dresses, and avoiding things like cooking. Elizabeth’s life suddenly changes, though, when her father and then her brother both enlist in the war effort. In the space of a few weeks, Elizabeth’s world has turned upside down, and the war soon feels all too real. Now, Elizabeth and her family must make sacrifices to support the war effort, and Elizabeth must try to find the courage to grow and change.

Elizabeth’s War by D.L. Finn is a delightful book that deftly shows one girl’s path to growing up and fighting a war with herself in the process. Elizabeth starts out as the typical baby of the family – slightly coddled, having lower expectations placed on her than her siblings, and allowed to stop trying things. Elizabeth’s refrain in the first part of the book is “I can’t do it!” when she tries something new, such as cooking or knitting. Elizabeth doesn’t want responsibility (and is terrified of it). She is aware of her tendency to quit and run away from things but doesn’t have an impetus to not do that before the war hits her family. Slowly, Elizabeth starts realizing that she can learn to do things and take on added responsibilities if she keeps practicing. When her family falls ill and Elizabeth finds that the people she relied on for so much need her help, she finally comes into her own. She realizes that she has to choose whether she will run away or stay and be strong for her family in turn. It’s a nice character arc throughout the book and one that leaves the reader satisfied. The writing in this book is descriptive and evocative. The reader joins Elizabeth’s world and goes on the journey with her. The author is able to show Elizabeth’s fear, uncertainty, and determination during her story. The supporting characters are well written and also all come alive as real people in the reader’s imagination. Elizabeth’s War is a lovely read for children.