Flowers from No Man’s Land: Letters to Mother from the Front Lines, World War I, France edited by Aleeta Renée Jones 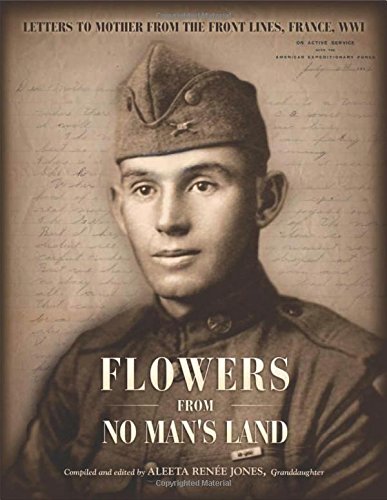 One war leads to the next. World War I led to World War II, which arguably led to the current war with the Middle East. While methods and tactics change, the core elements of warfare remain the same. Thousands of soldiers fight and suffer injuries. Some die on the battlefields, while others live to tell the tale. Except, most veterans dislike talking about their service. Active duty splits a person’s life into two distinct branches: the civilian life and the soldier life. Historians and family members who wish to learn more about what these soldiers faced must ferret out snatches of information where they can.

Corporal Alfred Earl Jones was not a leader. He was not legendary. He was one of thousands of average Americans who fought in France against the Germans during World War I. He was part of the 82nd Division American Expeditionary Forces and fought in the famous Meuse-Argonne battle. Jones was lucky to not be one of the thousands of men injured or killed. After about a year in France, he returned to The United States to live a long life. His granddaughter never even knew about his military service until she found a bundle of letters he sent to his mother before he enlisted, during basic training, throughout his time on the frontlines in France, and, finally, when he returned to American soil.

The Division I am in is touring France now but we are doing it a foot and it is a little hard on feet, but a person can stand a lot when he see a chance to get home.

The letters in Flowers from No Man’s Land: Letters to Mother from the Front Lines, World War I, France, are compiled and edited by his granddaughter, Aleeta Renée Jones. Aleeta has included a transcription of each of the letters as well as color scans of the letters and envelopes. The transcription would be smoother had she fixed the spelling errors, but she kept it letter-for-letter for authenticity. Her husband, Jon A. Oberdorf, PhD, a historian, includes maps and historical war information to provide context to the letters. A family tree is printed at the front of the book. Photos of the family and Jones in military uniform are included. At the end, there’s a brief biography of Jones’s civilian life. While these embellishments are crucial for understanding the letters, they may make the reader hungry for more to add depth and richness to Jones’s experience without having to turn to a search engine.

The letters are somewhat sparse, albeit this is most likely due to the military censorship regarding details of ongoing combat. Because of this, Jones references the trench warfare and firing at the Germans, but most of his letters are filled with financial instructions and his yearning for home. However, his experiences and the change in the tones of his letters are a treasure trove for historians and for tens of thousands people who want a glimpse into what their beloved family member may have similarly experienced.