Freedom of Speech: Mightier Than The Sword by David K. Shipler 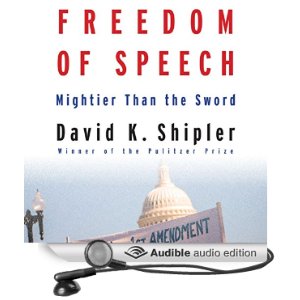 Freedom of Speech: Mightier Than The Sword, written and read by David K. Shipler, is a book about speech, it’s limits in the United States, and various instances when it has been called into question. The introduction to the book talks about the author’s own experience, both as a journalist and in the writing of this book, as well as touching briefly on the restrictions that curriculum requirements and state-wide standardized testing puts on what can be taught to students. The first section, Books, deals primarily with the removal of the novel Waterland from the curriculum of an AP English class in Plymouth, Michigan and the controversy surrounding it. The second section, Secrets, explores the circumstances of and decisions made by Thomas Tamm and Thomas Drake, two men with different and unrelated positions in government who both felt the need to speak up about things they became aware of in the course of their jobs. Part three, Stereotypes, deals with freedom of speech as it interacts with racism and bigotry, lingering in particular on various things said, written, and shared online about President Barack Obama. In part four, Politics, the author explores with the way money enables speech in the political arena, and by extension how the lack of money restricts speech. Part five, Plays, focuses on Theater J, a theater located in the Jewish Community Center in Washington, D.C., and COPMA (Citizens Opposed to Propaganda Masquerading as Art) a group of people active in the Washington, D.C. Jewish community who objected to some of the programing at the Theater that touched on the volatile politics of Israel/Palestine.

Freedom of Speech: Mightier Than The Sword is a well-researched and fair treatment of its subject matter. Though the opinions of the author regarding freedom of speech are quite clear even from the title alone, in each section he approaches events factually and without bias, always making a point to interview people from both sides of any conflict when possible, and presenting the opinions fairly. In the first section, Books, for example, he seems to sympathize with – even as he disagrees with – parents who want to shelter their children from mature materials to preserve their youthful innocence as long as possible. He also goes beyond the simple and immediate facts of the situations he describes, delving into the background of several of his subjects to give their actions and opinions context. He talks about Thomas Tamm’s upbringing in a law enforcement family, for example, and how his father’s disapproval of FBI “black bag” jobs in the 1970s influenced his own reaction to similar activities during his time working with the same organization.

Also worth noting is the performance of the author – doing double duty as narrator – which manages to be clinical and detached without being cold or un-compelling; he clearly cares about the topic, but reserves judgment of any kind. His cadence is even and consistent, his pronunciation and diction clear. While he does emote slightly when a quotation calls for it, even that is muted so that no part of the performance sounds significantly different than any other. This is a good and bad thing, as it can be very slightly hypnotic, and occasionally cause a listener to get lost in thought about the material, and loose focus on the words themselves, missing sentences or short passages.

Overall Freedom of Speech: Mightier Than The Sword is an interesting listen, covering a diverse array of situations with a coherent but not heavy-handed thesis, and a solid, if not exceptional, audio performance by its author.