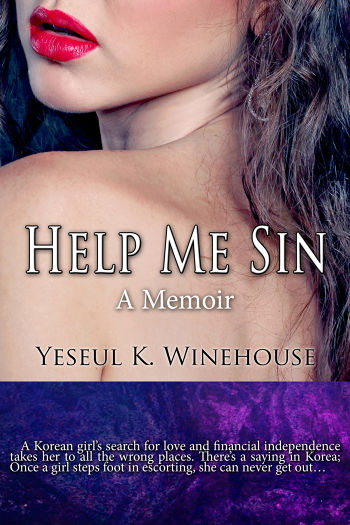 Help Me Sin: A Memoir, written by Yeseul K. Winehouse, is the story of Butterfly and her descent into the life of a prostitute. Following her life from a young age, readers experience Butterfly’s difficult family life, her interest in boys and sex, and her time spent as an escort. Help Me Sin questions how far people are willing to go in order to find financial security, even if they know the life they lead is not an acceptable one.

For starters, Help Me Sin is written blandly. There is never a single exciting moment in the text – it does not offer its audience any literary devices, rich imagery, or likable characters. The first couple of chapters are slightly intriguing, as they follow Butterfly through many important parts of her life. There is heavy focus on her youth spent with her grandparents, her cruel mother and unloving father, her transfer to/from America, and the overall unhappiness of her familial situation. Then the story swiftly shifts tones, and the rest of the book becomes entirely focused on how attractive Butterfly becomes and how many people she manages to sleep with.

Female-identifying people having an active, healthy sex life is a completely natural, wonderful thing. Society is slowly learning to no longer slut-shame women while praising men for their many conquests; a great step forward. However, the way Winehouse describes Butterfly’s relationships with the opposite sex will surely raise some eyebrows. For starters, she writes heavily on how every single boy is attracted to Butterfly. This is not an exaggeration. By the fifth chapter, the author continually points out how every male in the vicinity of the protagonist is incredibly attracted to her and could care less about any other girls. Men go out of the way to be with Butterfly, despite her turning them down time and time again. As the book progresses, Butterfly often finds herself in relationships wherein her partners put trackers on her phone, cut her hair off so other men won’t find her attractive, and even threaten to physically abuse her. Abuse relationships are something that truly exist, but Winehouse does a great disservice to her readers by never reprimanding the males in her book. The author reasons that the men acted the way they did because of how much they love Butterfly, which perpetrates the ideal of making up excuses for harassment in relationships – one of the major flaws found in this book.

Every single male falling in love with Butterfly would not necessarily be a bad thing, were it handled correctly by the author. With the way the world so aggressively sexualizes females, clearly some women receive more harassment than others. However, it does not help the book’s case that Butterfly is not an endearing character in the slightest. She is not at all humble, always going on about how beautiful she is and how popular she becomes in whatever situation. Upon going to college, Butterfly expresses, “I became popular from the very first day,” and how she “naturally became famous” with the other students. She also openly expresses how disturbed she is when a date expects her to pay for their popcorn after he purchased their movie tickets. This is explained later when Butterfly mentions, “I think a woman’s body has value, and a man should pay his price to be with a girl. If a man could spend time with a girl and not pay for her food, it was definitely a loss for the girl.” God forbid a woman wants to pick up the bill once in a while instead of vainly expecting their partner to pay for everything. Winehouse seems perfectly happy crafting Butterfly to be perceived as an inanimate object – a piece of meat for men to gawk at.

Every other female in this book, with the exception of her few friends, is written as jealous of Butterfly for stealing all the boys. Starting in middle school she’s called “a man-stealing fox,” and this notion basically carries on throughout the rest of the book. What’s more, Butterfly is insanely cruel to every other female she meets. She bullies girls in middle school, explains how its not her fault that no men want the other girls, and even says of a girl whose boyfriend she slept with, “I laughed at her for being so stupid.” What really makes Butterfly unbearable is that she has no level of guilt and doesn’t appear to have a single kind bone in her body.

Finally, on the front cover of Help Me Sin, the tagline reads, “There’s a saying in Korea: Once a girl steps foot in escorting, she can never get out…” The book does not perpetrate this statement at all. Butterfly doesn’t become an escort until over halfway through the book, focusing more on the boys who drooled over her in high school. When she does finally take on the role of prostitute, what then ensues are only three chapters about how good Butterfly is at her job, how unhappy it makes her, how she starts to fall for a client, and then how said client convinces her to quit her job to be with him. That’s it. The book is advertised as a tale about a young girl’s life as a prostitute, and it only manages to fulfill its expectation in the third act of the novel. Not to mention there are no problems with her leaving, except for a bummed manager who’s sad to lose his best client. This is of course a good thing in the grand scheme; the tendency for women escorts being beaten for trying to leave is awful, and should be put to an end. However, the tagline of the book is entirely misleading and will leave readers not only confused after finishing, but also feeling frustrated for wasting their time.