Henri Duchemin and his Shadows by Emmanuel Bove, translated by Alyson Waters 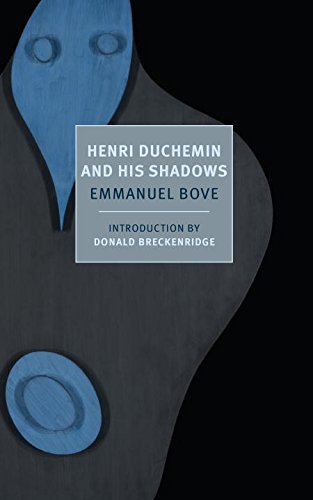 Allow me to begin by apologizing to my readers. It would be better if I were allowed to “suffer in silence,” as Emmanuel Bove is so fond of saying; but alas, I must write this review of Henri Duchemin and His Shadows and so my suffering must be known to all. Bove comes from the old school of writers after the Great War who fancied a stripped-down style free from all verbal decoration, as if eloquence was some great crime against humanity. I have always found the bare prose of Hemingway to be a bit tiresome myself; so reading this collection was something of a chore. If I wanted stark reality, I would live it and not seek it in fiction. I come to literature to feel elevated, to be entertained, to discover something about the human condition that otherwise would remain obscure. Instead, Bove depicts only the harsh reality of a war-ravaged Europe, in which poverty and despair are the hymns of the masses, in which hope is a bitter and constant companion. Bove’s portrayal of the human condition is ultimately thwarted, however, by his myopic zeal to convince the reader that existence is solely suffering. Each story seems plagued with this conviction so that the events of the story itself seem to be happenstance, merely a byproduct to be tossed to the wayside. I came to wonder if I should treat this collection the same way.

In the stories of Henri Duchemin, all the protagonists suffer miserably in solitary poverty. All are poor and constantly suspicious of friends, family, and lovers. None of the narrators appear particularly trustworthy, even though they are constantly assuring the reader that they are indeed trustworthy. Perhaps this is the point. Perhaps this state so insisted upon is Bove’s embittered reality (he was a constant victim of misfortune in his personal life, constantly on the verge of destitution). If Bove’s goal was to depict this miserable condition, then he has succeeded admirably. However, I question the very nature of this class of literature. I do not find it entertaining. I do not find it informative. I do not find it elevating or comforting. I find that it is for those folks who are so caught up in the plight of suffering that they look for excuses to wallow in it a bit more, thinking nothing of how to solve their plight. Bove’s stories themselves are slight, about a visit from a friend or the story of a lover, but they are blown into extreme proportions as if even the slightest act of quotidian life is cause enough to write a book about suffering. It is all rather melodramatic for me. How tiring it would be to lament every interaction with every other human being, finding no consolation. Instead, I am just tired of interacting with these stories.

The most memorable and notable story in the collection is the first: “Night Crime.” It stands as an antithesis to A Christmas Carol. In it, Henri Duchemin dreams of how he spends his Christmas Eve trying to purchase some lost human connection with funds from a man he was convinced to murder. Henri travels haphazardly between one loathsome locale to the next, without purpose or agency, only with a feeling of sorrow and helplessness. He cannot buy love from any human, cannot ease his suffering. He visits a bar and buys drinks for all in attendance. He thinks he has earned their love, but realizes that they do not actually like him and so he leaves. He finds a woman, who says she loves him, but when they return to her room, she denies him and says she wants to scream. He leaves without argument. Henri comes to realize that the money for which he killed a man provides no boon but the means to live apart from mankind. Henri awakens and recalls from the dream only an old man who advocates that suffering is the path for redemption—but that notion “did not concern [Henri], for he had never done anyone any harm.” Suffering is merely a state of being, regardless of human action or inaction for good or evil, regardless of any need for redemption—like living in a state akin to original sin. Unlike Ebenezer Scrooge, Henri Duchemin does not come out of his experience finding warmth and redemption in human relations, but rather realizing that respite from cold humanity comes only in solitude.

Many of the stories in this collection concern the narrator’s distrust of significant others—be they wives or girlfriends. In “What I Saw,” a man tries (unsuccessfully) to prove to himself that his girlfriend is faithful even though he insists that he saw her kissing another man. In “Is It A Lie?” a husband fails to convince himself that his wife, who was out all night, is telling the truth about where she was and, ultimately, decides “rather than losing everything, it would be better to suffer in order to have the joy of living with the woman he loved and who had enough respect and fondness for him to go to the trouble of lying.” In “The Story of a Madman,” the narrator severs ties with all friends and family, just to make others suffer and to prove to himself that he can live with the pain of solitary life.

Bove appears tormented with existential suffering to the extent that all his characters side with suffering, unable to help but to cling to suffering as if, in shedding it, they would discard their humanity. This persistent viewpoint makes for a rather dismal read overall, which is not relieved in the slightest by the terse and repetitive nature of the prose. It is as if Bove must convince himself that he is right in believing that suffering is the primary mode of human existence. In fact, he attempts to convince his audience of his suffering so fervently that I am disinclined to believe him (just as it is hard to believe anyone who must insist that he or she is telling the truth—it reeks ever of falsehood!). I, for one, was left convinced of nothing but the sincerest belief that Bove’s own psychological and financial troubles so colored his own view of the world that he was blind to anything but suffering and so could not write about anything else. His prose seems so tunneled in vision that I have trouble even taking his intimate knowledge of suffering seriously because it lacks the context of the whole human condition—like trying to take seriously a person who fervently insists Twilight is the greatest book ever even though he or she has never finished another book in his or her life.

If you like sad, depressing literature, give Bove a chance. He is not without skill in crafting a memorable tale. It is Bove’s bleak illustration of existence that bothers me so greatly; he seems so consumed with the task of convincing the audience to believe in the miserable state of the world that he becomes a child playing tea party with a reluctant adult, constantly insisting that the adult take another sip from an empty cup. Well, no more tea for me, thank you, but you all are welcome to take my chair and join him at the table if you would like.