Hot Box in the Pizza District by Thomas Keech 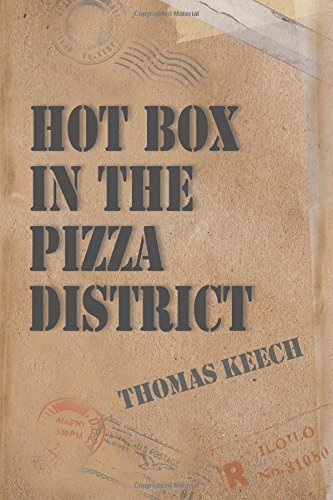 Hot Box in the Pizza District is a New Adult title that follows Tim, a twenty-year-old straight A college student, living in a house with his two best friends. Things are going well for Tim, he’s not exactly sure where he’s headed, but he’s out on his own and living his own life. However, the delivery of a birthday gift from his estranged father is the beginning of a new chapter. While attempting to return the box without having to talk to or see his father, Tim meets Eileen, a twenty-three-year-old woman working on her masters in psychology, and sparks fly.

The novel is the very essence of general fiction – a book that is focused on the daily lives of its characters, and lets the readers follow along as they struggle to learn who they are and what they want in life. The book touches on common life experiences such as romance, complicated family dynamics, the death of a loved one, infidelity, and depression – all centered on a time in Tim’s life where society dictates that people are expected to have a life plan, but so few people actually do.

The book is honest in its dealings with relationships, although it remains slightly removed from the characters, which lessens the emotional impact of the narrative events. This is particularly apparent in the handling of the death of Tim’s father, where the emotional distance from Tim makes it difficult to decide if he’s feeling anything at all. Tim’s interest in Eileen devolves into obsession in the last quarter of the novel, which begins to border on stalking. This may make some readers uncomfortable, although Eileen doesn’t seem to take his attention in a negative manner. The book’s pacing is somewhat sluggish, and it may take readers some time to become involved with the story.

In total, Hot Box in the Pizza District has solid writing, and the struggles in the story are familiar enough to resonate with many potential readers.