Living Fulfilled: The Infectious Joy of Serving Others by Eleze “Lisa” Thomas-McMillan 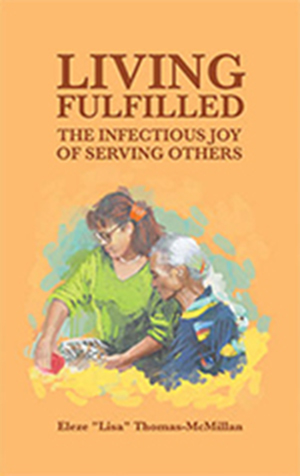 How should someone respond to social injustice? One woman walks.

Living Fulfilled: The Infectious Joy of Serving Others is Eleze “Lisa” Thomas-McMillan’s memoir about what inspired her to serve others and how she took action.

The book is broken into six distinct sections: an introduction, four parts, and an epilogue. The introduction gives a brief overview of the book. The first part is written in a memoir’s traditional style and comprises five chapters of her childhood in Alabama, dropping out of college, her flight to California, and her ultimate return. For a debut writer, these chapters are refreshingly polished and delightful to read. They provide a vivid backdrop of McMillan’s experiences and personality. The reader also learns how she has devoted her life to serving food to the poor and hungry.

“Often, help needn’t be a large donation or grand gesture. A few dollars, an offer to lend a hand, or even just a small smile can go a long way toward healing some of the world’s ills.”

The second part comprises what McMillan calls journal entries for the walk of life. This is her second walk and her longest, traveling primarily by foot from Brewton, Alabama to Washington D.C. during Spring 2005 and shadowed by Frank, who drives her van pasted with signs against capital punishment. Along the way, she meets with Governor Bob Riley and later with Congressman Bonner. Her hopes to meet with President George W. Bush are dashed. Congressman Bonner even refuses to deliver her letter to the President, explaining that he’ll rewrite it from his own perspective. Instead, it seems to be the people along the road that McMillan meets that revive her spirit.

While it’s understandable that McMillan would choose to write this part as journal entries in an attempt to capture the moment, it would have been more effective if it were as polished as the opening chapters. The section is broken down by state and then by date, but times of when the journals were written are hit and miss. Tenses switch, so it’s sometimes challenging to follow the narrative. Other times, it dissolves into a redundant series of stream of consciousness. Her vacillation between fear and compassion for dogs becomes exhausting, as does her frequent moments of anger at her shadow driver, Frank, for going the wrong way or for putting her in danger. At the beginning of the trip, Frank drives her home so she can sleep in her own bed and, presumably, back to where she left off in the morning. However, she later sleeps in the van for most of the trip. If these journal entries were as well written in her opening chapters, her struggles and triumphs might be more relatable but the melodramatic passages keep the reader at a distance, wary of these extreme highs and lows. Often anger and fear are swept away by over-the-top gratitude, prayers, and Bible verses. McMillan’s so-called signs from God foreshadow this same self-focused, histrionic behavior. It is unclear whether the earthquakes were signs only for her or also for the others in the vicinities. However, her devotion to help people less fortunate than her is so all-encompassing that calling her self-centered seems not only a stretch but also profane. Suffice it to say that this book presents a bundle of contradictions that each reader needs to decide for him or herself. This doesn’t necessarily detract from the book; on the contrary, most people are full of contradictions and there’s a certain admirable bravery in McMillan exposing hers.

The third part comprises two short chapters of two successive walks she completed in 2007 for two men, Darrell Grayson and Luther Williams, as they approached their execution dates and a chapter on her current work feeding college students as Carlisa, Inc. This part returns to the polished form of the beginning. The passages are concise, researched, and thoughtful.

Part four is on the people she’s met who have made a strong impression on her, either for the help they’ve given her or vice versa. These short passages, taken out of context, are a lot for the mind to absorb and retain all at once. These would have been more meaningful woven into her earlier entries.

The final section is the epilogue and McMillan’s parting advice for how the reader can be a source of good in the world. This rounds out the book nicely for those who are reading this book for ideas of how to do something about societal inequality. Injustice is easy to see for those who look, and even for those who don’t, but knowing what to do about it takes more thought and commitment.