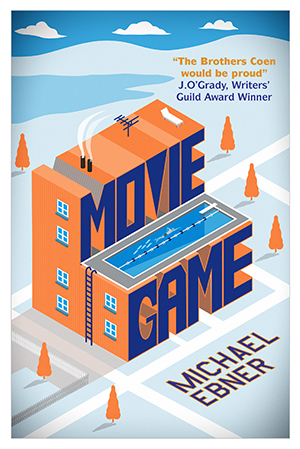 Movie Game By Michael Ebner is tagged as a young adult, general fiction novel. It begins with our protagonist, Joe (aged 14) realizing that he’s lost his girlfriend. She dies after spending a long time in a coma. The font in the novel changes and we fast forward to Joe years later, where he’s become a hard drinking, movie watching loser who chases after girls and seems as directionless as he likely feels. The story then flips back and forth between past and present, and outlines the strange and sad life of Joe and his sister, Loren.

This novel is an oddity. The strongest parts of it are where the font changes and we flip back to Joe as a fourteen year old. He’s angry and full of rage about the loss of his girlfriend, and it’s a look into the mind of a young boy who has just experienced a huge loss and doesn’t have any idea how to process it all. It sometimes reads like a script, and the plot flips back and forth rapidly enough to maybe cause some readers to have to re-read. Despite the overall oddity of the plot, Joe is a well-developed character. It’s easy to feel for him in his situation, and his need to control the outcome of events when he makes a bad decision. His sister Loren is sympathetic and relatable as the introverted book nerd.

There is something interesting in the development of the story when it’s ‘past Joe,’ as the reader gets to experience the extended reason of his directionless anger when it peeks into the life of his disconnected and selfish parents. The writing style is fast paced and oftentimes funny, and its reminiscent of a black comedy; dark and amusing in its bluntness. It’s a research paper that sums up its thesis perfectly: people lie, and people die.