Orphans, Assassins and the Existential Eggplant by J. T. Gillett 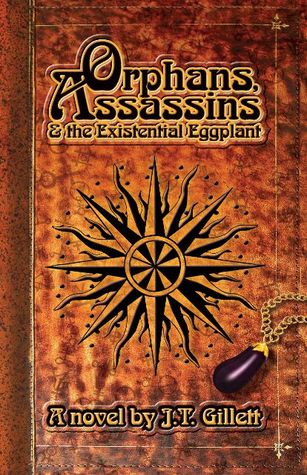 Describing some books can defy clear rules and expectations. Orphans, Assassins and the Existential Eggplant by J. T. Gillett is one of those books. It begins its enchantment of the reader with its very title. How in the world do these three things fit together? Where would one ever find an “Existential Eggplant”? Gillett fully comprehends that attraction and jumps immediately into setting the stage in response. The time is the spring of 1211. The immediate setting is England. By the third page of the story, the reader learns about not only Layla’s character, but also what she’s hoping to find, where she has traveled and may again travel in order to find it, and the historical as well as fictional people who may get in her way. These include King John, Pope Innocent III, renegade Templars, and trained Assassins.

The book bubbles and flows from one adventure to another across Europe and North Africa, meeting up with saints, sinners, and a Children’s Crusade of orphans. It moves with ease through each peril and triumph, drawing the reader further into not only the story, but the moment in history and mythology encompassed by the thirteenth century. Like many stories, this one twists and turns back upon itself. It contains hints, secrets, and rumors that lure the reader further in. The storyline is well developed. The characters, including the story-telling Existential Eggplant amulet, are well rounded, with traits ranging from noble to flawed. Gillett creates several strong female characters and a somewhat female-favored storyline.

Orphans, Assassins and the Existential Eggplant is a frolicking adventure that lightly addresses topics such as the meaning of love, friendship, morality, and Paradise. It presents a world both fantastical and real for the reader and would be a great read for anyone who enjoys humor, fantasy, and a touch of existential philosophy.