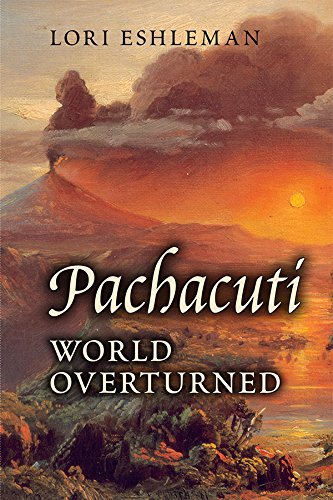 In the mid-Eighteenth Century, the Kingdom of Quito, in modern-day Ecuador, was a stronghold for both the Jesuits and the Spanish. The stage was set for change, for conquerors and conquered alike.

In Pachuacuti: World Overturned, Lori Eshleman draws on the richness and distinctiveness of this setting to weave her tale. She creates and enlivens the characters through their interactions with each other as well as their personal struggles and lives. Gregorio Moncada, the Jesuit inquisitor, finds himself wondering about his vocation; Santiago Huaman, mayordomo of the Moncada estate, wavers in the direction of his duty; Ana Alfaro, a senorita on the brink of womanhood, seeks something she cannot quite define. Even characters that at a glance seem small or insignificant leave their individual mark on the world Eshleman develops.

The steady progression of the story develops non-human characters as well: the Catholic Church, the Jesuit order, indigenous beliefs, and the brujos or yachacs (medicine people). The overarching conflict encompasses them all. When the story closes, as the title proclaims, the world for all has turned.

“In spite of his dull state, Santiago felt moved. For a long time now he had desired to see. Wasn’t that the meaning of his namesake: hawk – huaman? But the future before him seemed like a thick panel of glass, darkened by layers of smoke. All he knew to do was his duty, and that was sometimes painful.”

Eshleman brings an artist’s eye to the physical world she builds. Stately Quito reveals evidence of decay and age, the influence of the Spanish clear in its design; the volcano Pululahua a living, breathing being; the forest overflowing with wild, unusual life. Her descriptions are broad brushstrokes with occasional details, enough to bring it to life.

Fortunately, the book has a glossary of the Spanish and Quichua words used in the book. Both languages are sprinkled through the story and add a sense of authenticity to it, keeping the reader in the time and place. There is occasional history as well, but this is clearly a story rather than a history. Overall, the story draws the reader in with ease. Its short chapters move at irregular intervals from setting to setting to bring in the point of view of each of the main characters.