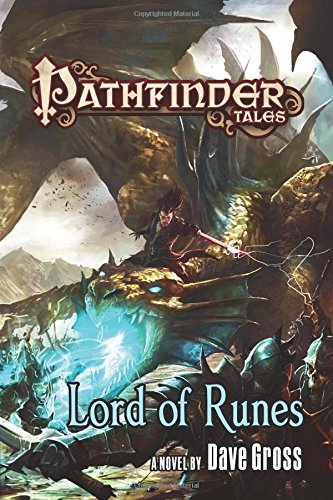 Theoretically that might be true, but a reader that has no familiarity with the series or characters might find the beginning of Lord of Runes a little bumpy, with many unfamiliar terms and references not being wholly explained. It should only take a couple chapters to get through this initial discomfort, and in general, not knowing anything about the setting is not a detriment to feeling grounded in the settings the characters find themselves in. Dave Gross is adept at making the characters quickly feel like old friends and uses their history as teasers for other tales the reader might like to enjoy.

Lord of Runes certainly reads like it’s based off a roleplaying game, which can be good or bad depending on the preferences of the reader. Occasionally “random encounter” situations can slow the narrative down just a touch. What Lord of Runes does really well, though, is in how it breaks away from epic fantasy cookie-cutters. Stocked with traditional fantasy tropes, such as goblins, wizards, sorcerers, and rogues, none of the monsters or characters feel stereotypical or flat. Even the goblins chanting, reminiscent of Tolkien’s goblins from the Hobbit, seems more like a respectful tribute rather than cheap imitation.

“Ygresta had left me far more than a codex of blank pages. He had left me that which I love best: a mystery.”

While Radovan and the Count find themselves in the middle of an international if not global crisis, the novel is more about self-introspection, character development, and friendships than it is about slaying evil monsters and saving the world. The Count has more in common with Sherlock Holmes – with his love of solving mysteries, his arrogance, and his “mind library” – than Conan the Barbarian. Lord of Runes certainly has exciting action scenes, but the true thrill is watching the clever Count try to break apart mysteries and find the truth underneath, while his “Dr. Watson” companion Radovan tries to save the Count from himself. This is a good book for anyone who loves epic fantasy but wants something that doesn’t just follow down the well-trodden paths of its predecessors, and who wants to read stories propelled forward by the characters, rather than by plot devices.