The Anonymous Signal by Erec Stebbins 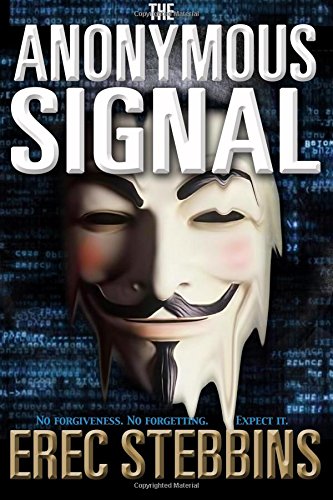 War has been declared on the world. Not with guns or armies but with a virus that quickly and decisively infects computers all over. Within days financial institutions are shut down, governments are breaking down, and there is chaos everywhere. Leader of elite Intel 1 team within the FBI, John Savas is tasked with trying to find the mastermind behind the madness: a man known only to them as Fawkes. Fawkes turns out to be the ultimate enemy – he is faceless (other than a mask), nameless and doesn’t exist in any records. Additionally he has the power to shut down the world with a few keystrokes. With the normal protocols and procedures blown apart, Savas gathers his team – with a few unorthodox additions – and works on gathering enough info on Fawkes to strike back before the entire world falls apart.

The Anonymous Signal by author Erec Stebbins is a thrilling and frightening story of what could happen if all the electronic systems in the world went down. In Stebbins’s world total chaos, confusion, and fighting doesn’t take long to start once the computer worm is released. The author handily shows how easy it is for law enforcement agencies and government departments to lose touch with each other and begin making their own rules. This is shown with both Savas’s department and the military – both groups quickly start making decisions that would be questionable in times of peace. The motivations are different, however, as Savas makes his choices (using wanted yet innocent people for operations) to get Fawkes and fix what is broken. The military’s motives are less generous – they are interested in declaring martial law and changing the balance of power in the country, temporarily of course.

The plot is told primarily through flashback sequences – it weaves back and forth between events as they happened and a tribunal after the fact. Oftentimes, this style can be irksome but it works well for this book as it helps build the suspense throughout (particularly as it becomes clear that the tribunal is not interested in the truth but a scapegoat). The characters themselves are a bit one-note and even by the end the reader doesn’t necessarily feel that they know them at all well. This isn’t a particularly big issue in this book because it’s not about the characters really: it’s about the fragile system upon which governments rest and how easily that system can be toppled.