The Birth of Politics: Eight Greek and Roman Political Ideas and Why They Matter by Melissa Lane 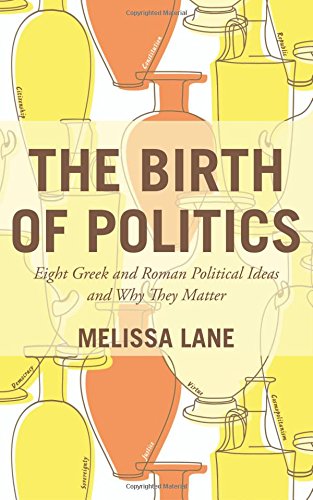 Classicists have a hard go at maintaining relevance in this day and age. Trust me, I know; I studied this stuff in school and was a bit of an academic leper for it. So often my kind is kicked to the curb and told that it does not contribute to the advancement of society; all we do is sit around and talk about a bunch of dead white guys. Maybe that is a fair assessment. I don’t think so, but what do I know? I just think it is important to know where we have come from to know where we are going. Regardless, most likely these critics have only experienced the classics during some dull general education course in college and promptly forgot what they learned after the test because they didn’t see what relevance it would have in finding anyone a job. Melissa Lane’s book, The Birth of Politics: Eight Greek and Roman Political Ideas and Why They Matter, tries to answer for these modern utilitarians the relevance of the classics in a modern political age, ultimately succeeding only in ensuring that these critics are justified in their positions.

The book is primarily a survey of eight concepts that people largely contribute to the Greeks and Romans, namely: Justice, Constitution, Democracy, Virtue, Citizenship, Cosmopolitanism, Republic, and Sovereignty. These notions are used as a means to discuss the history of political thought, from Solon to Marcus Aurelius and the big ones in between (Socrates, Aristotle, Thucydides, Cicero, etc.). But the Classics world does not need another trite survey. It needs something bold and this book is not it. Lane presents a trite picture without any character or detail – another bad rendition of the “flower in the vase” painting. Many of the key ideas and principles are passed over quickly and there are few direct quotes from the source texts to give the reader a feel for these different thinkers about whom she speaks. Instead we are left only with the analyses that Lane offers, analyses that are elementary in nature and completely disengaging.

I love the classics – it is my bread and butter – and I was bored out of my mind. Reading this book was like trying to take a bath in a tub filled an inch high. Sure, this book is not written for me, but for the novice coming to the game with little knowledge in the subject matter; but even then, the prose proudly proclaims its dullness and does not even have the good sense to lean on the illuminating excerpts from the brilliant and intriguing source material. Give me some astounding new idea or narrow your focus drastically. Take a chance with dusty, worn-out material; otherwise, I will flee quickly from this overview that belongs only in a Survey of Early Political Thought class. Even then, this book is an injustice, for it will fail to engage the apathetic youth of today. Reader, if you care one iota about the classics, find a book with a narrower topic, something with a little meat on the bones.