The People’s War by John Tompkins 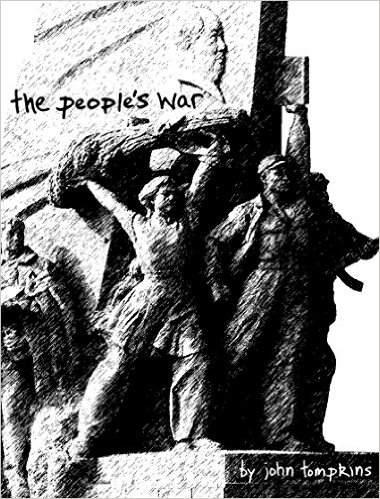 Although The People’s War by John Tompkins isn’t an exact account of the events that happened on Tiananmen Square in 1989, it feels like one. The book starts on April 21st beginning with inventory list of bolts, nuts and other items and day by day follows the events of Tiananmen Square protest to its bitter end on June 4th. This mixed account is made by Jing, a humble bookkeeper living in the building facing Tiananmen, the biggest square in the world. Walking through the square to work and back home is Jing’s every day routine. Jing is really annoyed going through the crowd of these rioting kids, none of them much younger than him, watching and hearing their marching and chattering. He doesn’t care about their plea for freedom, democracy, and free speech. All of these are abstract to him. He doesn’t believe that freedom can change people’s gloomy lives. He sees the protestors as the spoiled elite’s offspring that don’t want to work. However, talks and rumors here and there, raise suppressed memories and desires. Eventually Jing takes a stand for all of them, and for us. Since then the world has changed dramatically.

“This movement, whether these kids realize it or not, has become the battleground for China’s future.”

Only 27 years past, but 1989 Chinese Tiananmen Square protest already sounds like some ancient event. However, the protest that began after the death of the reformer and former Chinese Communist Party General Secretary Hu Yaobang has played a significant role in history. Hoping for better and happier life Chinese people wanted Hu’s reforms to continue. They wanted change and their hope hinged in an open dialogue with the government. This hope didn’t materialize. Instead the Chinese government declared a martial law and opened fire. While this mass manifestation of dissent and the following massacre were widely reported by Western journalists throughout the world many details of this protest were hidden from the public by Chinese officials and still remain unknown. John Tompkins’ novel deals with one of these mysteries. With the same mystery also deals Antony Thomas in his documentary “The Tank Man” that maybe has been a source of inspiration for this book.