The Tower by Paul Gore 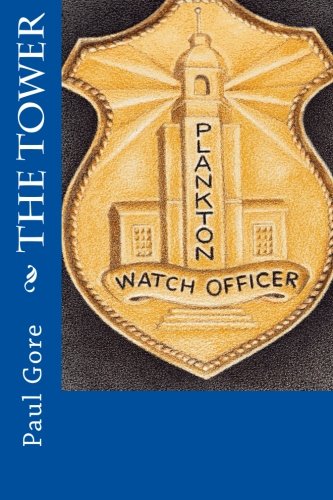 With a water feud dictating all interactions in the town, it is no wonder the Mayor has such a job navigating the ins and outs of his town’s politics. Not only does he have to wrangle a Montague/Capulet feud, but he must also handle a whole host of characters who definitely make his job more interesting. There is the too-old-for-his-beat cop, there is a new-to-town antique dealer with an amphibious car, a spunky photographer looking to put the town on the map, a historical society better known as the hysterical society, and a whole host of cat ladies whose preferred method of communication is via post-it notes. It is up to the Mayor to solve the little bumps in the road that face every small town and somehow manage to keep his sanity along the way.

This is a simple tale, light hearted, with good imagination. In all probability it will leave the ready feeling happy at the end. Gore is able to capture everyday life with ease. It may be a simple story about everyday life, but Gore fills every page with fun and interesting details that add a pleasant depth to the novel. The only complaint to be found is that it is much to short. While Gore makes sure that each of the threads in his tale isn’t left dangling, they are often tied off too soon. All of his characters are given a few short sentences to end their story, which is not enough, leaving the ending of the book feeling rushed. Each of the characters are interesting and compelling enough to warrant at least a couple pages each as Gore wraps up each of the fates. If the worst thing that can be said about his work is that there isn’t enough of it, then that has to be a good thing.

Q. What made you want to write about small town politics?

A. Small towns are great. I’ve lived in a number of them over the years. The politics are always interesting and contentious and almost always much ado about nothing, as much soap opera as social science. As “show business for ugly people” politics is, in a small town at least, a chance for everyone to have their say and their 15 minutes in the spotlight. It seemed a good screen against which to project a lot of personalities.

Q. Why did you decide to open the book with Brad? All of your characters are equally interesting and compelling, it is easy to imagine any of them could carry the opening well.

A. Brad was created specifically for the opening, long after the story itself had been outlined. I wanted someone who was new in town and curious about the place that would help the reader to become familiar with the history and ambiance without requiring too much tedious detailed description. His character kept growing as I got to know him.

Q. How did antique radios come to play such a large roll in the book?

A. As an antique radio enthusiast myself, I think a better question is “Why don’t they play a big part in every story?” I wanted Brad to be an antique dealer or appraiser given the nature of the little historical town filled with antique stores, and the radios were a good way for me to get into it. I don’t know too much about antique jewelry or Civil War artifacts, but the old radios are delightful, very American and very under-appreciated antiques that I know something about.

Q. Where does the name Kyrmet come from?

A. I have a friend in Grants Pass by that name, so it just kind of popped into my head as I was writing. I seldom spend too much time on naming characters any more. I reach out and the first thing that seems to fit gets used. Years ago I used to agonize about coming up with perfect names or names with complex allegorical meanings, but now not so much. Plankton is a pretty normal place. People there aren’t pretentious about their names.

Q. Does Plankton resemble a real town in Oregon? How did you decide on Oregon as your setting?

A. Plankton is based on Oakland, Oregon where I practiced veterinary medicine for many years, though there are elements of several small Oregon towns in the story. I love Oregon and its people and its history, from Lewis and Clark to the pioneers to the environmental movement of Tom McCall and the Oregon Country Fair. It was a pleasure to set a story here. I will do more I’m sure. In fact my next book is set in Plankton as well. After that there are some other parts of the state I want to explore.

Q. How did you come up with such an interesting host of characters?

A. Well thank you for saying so. The characters are all fictional though I found it useful to incorporate bits and pieces of people I have known throughout my life. I decided not to use any real local characters in the story because that can be quite limiting. People are liable to notice if someone acts “out of character.” That being said, there is no shortage of interesting personalities in a little town like Oakland.

Q. Do you have a favorite character?

A. I always considered the town itself as the most interesting character, and I hope that comes through in the novel. The story, the personalities, the conflicts, the humor and the goodness of Plankton were all derived from my decade of living there.

Q. What would you like the reader to take away from your story?

A. That Oregon is a great place to live. That doing your best and seeking to do no harm is what life is all about. That there can be a little magic in the world if you open your heart and look for it.