As the Poppies Bloomed: A Novel of Love in a Time of Fear by Maral Boyadjian 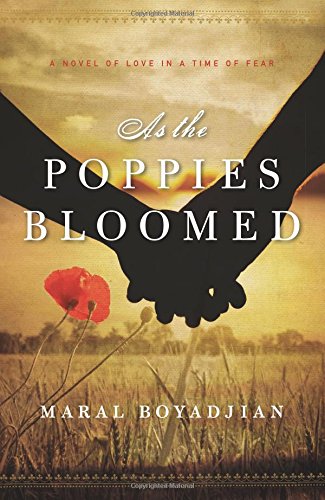 This is a story about a small village in the Ottoman Empire on the verge of World War I. It is a story of the intertwining lives of families as they go about their daily lives, as they work in the fields, in their homes, prepare food, prepare for seasons, for marriages, and the births of children. Anno, the youngest daughter of the village’s headman, grows up in the mountainous town of Solar. She looks forward to a normal life, but darkness always seems to touch her day-to-day life. She worries about her brothers who are often away on secret business, she worries about the Kurds and the Turks who will often harass their village, and as the rest of the world plunges into war she worries about the ever darkening rumors that make their way to their tiny little village.

As the Poppies Bloomed is a beautiful novel. Maral Boyadjian paints a gorgeous picture, with intricate detail regarding the traditions that govern the daily lives of the rural Christian Armenians. It is easy to get lost in her descriptions of meals and the tasks that have to get done in order to live in a society that is significantly less than modern. With her host of characters, we are able to get to know and love a whole village from the youngest baby to the matriarchs, the patriarchs, the goat herders, and the freedom fighters. Everyone has a role. The landscape is beautifully described: by the end of the book the reader will feel like they too lived in that small mountain town. They will know the fields and the streams, the colors of the seasons and the harvests. She also provides some valuable insight into the Armenian Genocide, which is a tragic part of history that is seldom taught or understood in the average American psyche. This is a tale of love and loss that will also satisfy any history buff. It is a portrait of a time long past, of a people who were massacred, and those who survived were forced to leave their homes and so many of their traditions behind.