Corum – The Knight of Swords: The Eternal Champion by Michael Moorcock 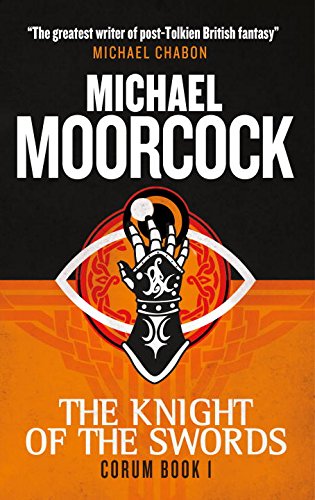 Corum Jhaelen Irsei — or Corum, the Prince in the Scarlet Robe — is on a quest of vengeance after his entire race was slaughtered by the Mabden. Long thought to be a primitive race, and mostly ignored as a nuisance, the long lived Vadhagh and the Nhadragh had focused instead on pursuits of knowledge and nursing the long suffering hatred between their two races. However, in the few hundred years since the last of the actual fighting between the two races, the Mabden have evolved and turned the Nhadragh into slaves without the Vadhagh even noticing. Now, as the last of his species, a badly maimed Prince Corum must seek out supernatural help from the old gods in order to hunt down Glandyth-a-Krae, the Mabden that murdered his family. Although his vengeance must wait, as first he must find a way to steal the heart of a Lord of Chaos, the Knight of the Swords, and the deity responsible for the Mabden rise.

First of all, this is not a new book — the first printing was in 1971 — instead this is a reprint by Titan Books. Author Michael Moorcock has been a solid fixture in the fantasy genre since the 1950s. His familiarity with the written word is palpable, and is seen in the ease of which he manages to build his worlds. Despite the new races, strange names, and exotic locations it is incredibly easy to be swept away into the adventure. The Knight of the Swords is very much an adventure/quest styled novel, and people more interested in a character driven series may not be so easily drawn in. Despite the focus of the narrative revolving around Corum, the POV is third-person removed so that the reader is more involved in following the actual events that happen, and are less emotionally attached to the main character than if they had been reading a closer third-person perspective or inside his head with first-person.

The story moves quickly, with Corum often having many different adventures in only a few pages. He encounters races other than the three mentioned above, outwits a king, flies over a wall of fire, and dangerously argues with a self-absorbed demi-god. This is a wonderful action packed fantasy novel that is worth checking out, and this new edition will hopefully introduce a new generation of readers to an older work.