God and Government: Twenty-Five Years of Fighting for Equality, Secularism, and Freedom Of Conscience by Rev. Barry Lynn 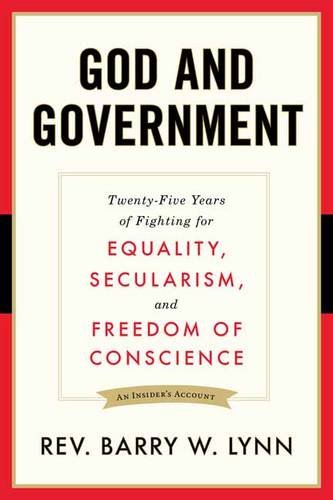 For several decades there has been a familiar voice in the public sphere regarding the separation of church and state. Reverend – yes, Reverend – Barry Lynn, the current executive director of Americans United for Separation of Church and State, has often been the pro-separation voice on television news programs, including Fox News. With his characteristic wit and wry humor, Lynn provides a reasoned perspective on the Religious Right’s attempts to push Christianity on all Americans, including the nonreligious. While Lynn has previously published several books on the separation of church and state issue, his latest is more personal.

In God and Government: Twenty-Five Years of Fighting for Equality, Secularism, and Freedom, he collects various writings from the last twenty-five years, mostly columns from the AU’s publication Church and State, and provides updated thoughts about the issues they discuss. The writings cover a wide variety of topics on a common theme, from prayer in public schools and religious-based school vouchers to women’s reproductive rights and the marginalization of secular Americans. For anyone interested in this issue, from either side, Lynn’s writings are an insightful and humorous read.