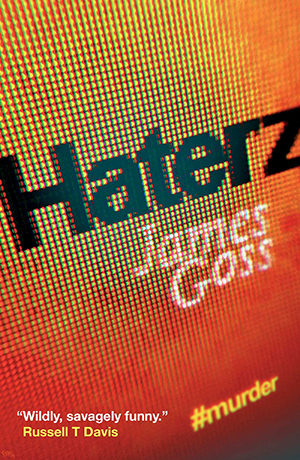 Haterz is a fast and addicting crime read for the modern era. Dave is an average guy, a failed actor who makes ends meet by chugging on street corners – trying to get people to sign up for various charities – the kind of person often ignored. He’s fine with being invisible, prefers it actually, but what really has gotten under his skin are the multitude of irritating people on the Internet. Finally he’s had enough and snaps, murdering his best friend’s girlfriend – Danielle, she of the snide Facebook comments and constant bragging. It was surprisingly easy, except that someone saw him. Now Dave finds himself blackmailed into working as a killer for a mysterious organization whose goal appears to be to make the world a better place by knocking off people who cheat, lie, steal, or are just general jerks online. As time goes on Dave finds himself less trapped and more liberated, enjoying what he’s come to see as a public service. On the other hand, the sexual predators, comment trolls, and online con men that used to feel safe being cruel thanks to the buffer of the internet are starting to feel decidedly unsafe.

“Sticks and stones may break my bones, but words can never hurt me.
I’d always thought that was wrong and stupid. Time to prove it.”

Part of the reason Haterz is so much fun to read is how current and Internet savvy the story is. The book uses Facebook, Twitter, BuzzFeed, and various familiar Internet sites, acronyms, and terminology to illustrate its points. While some of the social media platforms and companies may have been fictional and created for the purpose of the book, they are all very familiar to anyone currently involved in the scene. All of Dave’s targets are stereotypes of people that most everyone is familiar with, and deep down hates just a little bit: the obnoxiously popular tween pop star with no discernable talent; that one friend on Facebook who can’t stop posting what they’re doing/eating/seeing every 25 seconds; the comment troll who’s entire existence seems to be involved in making other people feel bad. Hopefully readers won’t find themselves reflected in Dave’s various targets, but it’s likely that they will know someone who fits the bill.

On one hand Haterz is a fun fantasy romp through an “if only” killing spree, but it also is a reminder about how twofaced the Internet actually is. Yes, plenty of people have found the Internet a wonderful place, a support group of like-minded people who can share their passions, knowledge, and experiences with others (namely cats according to the suggested links on Facebook). However, this is also the same tool that allows others to lob death threats at creators of YouTube videos, and allows sexual predators unbridled access to children through seemingly safe chat rooms. Yes, the anonymity of the Internet is freeing, but it is also freeing to the baser, crueler natures of humanity due to the lack of repercussions for certain actions thanks to that same anonymity. Haterz is great story, and a wonderful reminder that people seen through the lens of the Internet can be horrible, but that not everyone is as bad in real life as they may appear online. For those that are… there may be a Dave out there with your number.