It Only Hurts When I Can’t Run: One Girl’s Story by Gewanda J. Parker 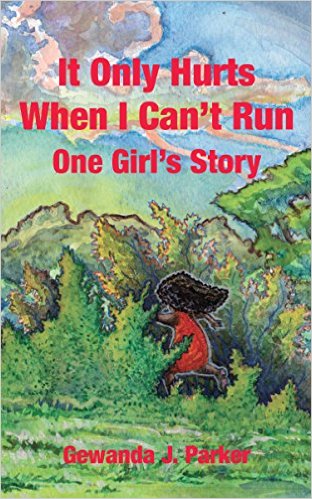 It Only Hurts When I Can’t Run: One Girl’s Story by Gewanda J. Parker tells the tale of Oma, a young black girl with a rocky childhood. Oma’s family has never truly been stable – her mother suffers from a drug addiction and is always coming and going, while her absent father isn’t even in the picture. She floats around from household to household, going wherever her mother drops her or the foster care system places her. Throughout the course of her young life, Oma must deal with abuse (both physical and mental), bullying, cruelty, and molestation from older men, all while growing up and finding her way through the world. It Only Hurts shines a light on the toll abuse can take and how turning to faith can help heal wounds.

Obviously this book is an important story to tell. The scarcity of literature representing black girls and boys is abysmal, so to receive a protagonist such as Oma – so bright, resourceful, and charming – is a breath of fresh air. This book also deals with topics that are far too real; those which other authors are often too afraid to touch. Parker writes about all forms of abuse that can be dealt unto a child, never shying away from the grit and the terror of it all. She also keeps the flow of the story quick and snappy, never lingering too long or allowing the words to start dragging.

Unfortunately, the negatives of this book far outweigh the positives. Starting on a technical standpoint, the book lacks depth. The descriptions are minimal, and metaphors and literary devices nearly non-existent. Information is delivered throughout the novel bluntly and with no finesse. A typo or two is never much to raise an eyebrow at, but more than a few spelling and grammar errors pop up in the entirety of the text. Most confounding, the ending is incredibly abrupt – it simply ceases without explanation. The author makes mention of a second volume in her introduction to It Only Hurts so perhaps another book is in the works, but that’s no excuse for cutting the story off without tying loose ends and providing some semblance of closure.

Another fault of the book is that Oma is shifted around between so many families – some people making only brief appearances while others come back into the story time and time again – that it is difficult to keep track of who is who. Obviously this is something that can actually happen to a child of an unstable household, but there’s not enough focus, description, or emphasis on the different characters. The differences in their foundations are hardly explored, so it’s easy to get the people and families confused continuously. Also, the multiple accounts in this book of molestation and rape of a minor are graphic in detail. It is, of course, important to acknowledge that these awful things happen to young people, but each of these chapters were incredibly explicit (the descriptions lacked in all other parts of the book except these, unfortunately) to the point of making it incredibly uncomfortable for the reader. Then, come the next chapter, the author drops the subject of rape entirely and has Oma focusing on school or god or something else non-related. The incidents are played as not important after the moment has passed, begging the question: why is the gravity of statutory rape not more heavily focused upon in this book?

Finally, the message of this book is unclear. There are many strong focuses throughout It Only Hurts, but the tone and themes shift so often from chapter to chapter that it’s honestly hard to tell what the author is trying to convey. Some chapters center on god and overcoming obstacles, others about how abusers can take any form, while some tell of the trials and errors of growing up. Perhaps the author hoped to touch on all of these subjects – in which case, she did so with flying colors – but the reader may find themselves wishing Parker had a stronger direction to focus her novel towards instead of grasping at all these loose threads.