Lucien and I by Danny Wynn 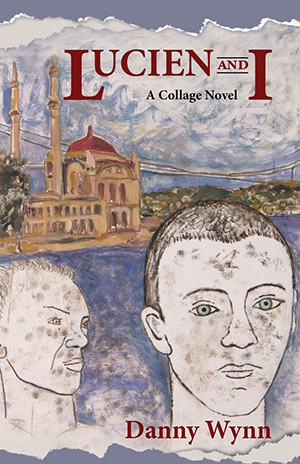 Lucien and I: A Collage Novel, written by Danny Wynn, follows the story of David Burdon and his friendship with the illustrious Lucien. The novel centers around the relationship between the two men, as well as the antics amongst their group of close friends, their problems with girlfriends, and their conquests of other women. The story’s kept short and told in a patched together manner of sorts – this being a “collage novel” as the title dictates, the style makes perfect sense. Wynn examines the relationships of the rich and laid back, who have nothing better to do than quote old films, drink all day long, and swap dirty stories of their latest lays – and what dark paths this lifestyle may lead one down.

A collage novel can make for a very nice read. Receiving small snippets of a fictional person’s life can be fun as it slowly unravels, exposing the character for whom they really are and how certain events in their life came to pass. Lucien and I, unfortunately, is not one of those novels.

The book takes place over the course of two years, looking at these wealthy socialites and their love of night life. After experiencing this book, the reader may find themselves asking this question: What was the point? Wynn attempts to draw readers in with this collection of beautiful moments that slowly add up to unrequited longings and stressed interactions, which he overtly fails at doing. The biggest flaw of the novel is simple: the characters are not worth caring about. They are all supremely shallow, which causes the audience to not emotionally invest in any one of them. That’s not to say that shallow characters of fiction can’t be interesting. On the contrary, in The Great Gatsby – a famous novel which Lucien and I often feels like it’s trying to mimic – is filled to the brim with shallow characters. The difference is that Fitzgerald knew how to craft shallowness while keeping his characters interesting and three dimensional, whereas Wynn does not accomplish this. The two lead characters, Lucien and David, are presented as cultured, intelligent, and successful with the ladies, but somehow manage to come off just as shallow as all the friends that surround them.

Speaking of the ladies, for starters, they’re all horribly written. Every single female is judged by her appearance, which the reader is acutely aware of as the protagonist almost always points out how “hard” each woman he meets makes him. The women in Lucien and I are all characterized as sexy and, most of the time, vapid. It feels as if the only purpose of these women in the book is to be sexualized or to have sex with the main characters. In fact, the only female character in this book who isn’t sexualized is an overweight woman mentioned in passing a handful of times, whose name is Peggy but referred to in the narrative as “Piggy”, making it clear that if a woman is not rail thin and drop dead gorgeous she must be ridiculed. This reinforces the notion that women are around solely to be ogled. What’s most frustrating about the portrayal of women in this novel is that it’s not remotely impossible to write a book about men with luxurious lifestyles who sleep around and not have the woman be demeaned in such a manner. Authors do it all the time, with great success, but this book never does.

Another problematic occurrence with women is found in the background of the main female character. Sharon, Lucien’s longtime girlfriend, is given the background story of having been raped as a child, a horrific thing to happen to any person. However, the incident is not only never brought up again, but the protagonist – after having found out her past abuse – proceeds to have sex with her without any verbal consent when she is not physically responding to him. This delves into the whole problematic nature of writers who feel that a woman’s only interesting backstory can be rape.

It’s worth noting that, on a technical standpoint, Wynn’s writing is fairly decent. The writing does attempt to act grander than it actually is by dropping these weighty metaphors and monologues from characters – few of which actually pay off – but the writing is still sound nonetheless. One confusing element of Luicen and I is that each chapter ends with an italicized quote that seems to come from a character, which might make the reader believe that it’s all leading up to, perhaps, some big reveal in the end. However, when that big reveal comes, these quotes have nothing to do with the conclusion, leaving the reader even more befuddled than before.

In short, while Lucien and I may read well enough, most readers may not find it worth the read.