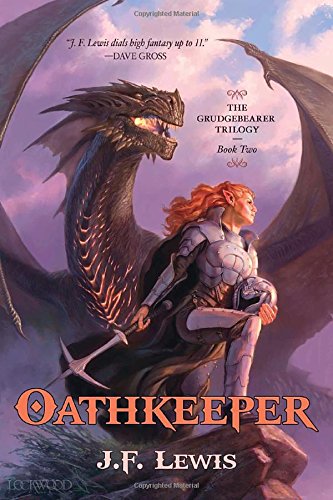 For the Aern, there are no idle oaths. A promise is binding: even a promise made hastily, in anger, which one later regrets.

Oathkeeper, by J. F. Lewis, is the second book in the Grudgebearer Trilogy. Lewis has taken the backdrop of traditional fantasy and spun it, like an artist working blown glass, into his own beautiful creation. There are elves, dwarves, humans, and gnomes, but Lewis has claimed them as his own, and he has fashioned his own constructs as well. One of those races are the Aern, a magically created race meant to be the ultimate weapon, but which has turned on its creators, the elven Eldrennai, who are already at war with another race, the lizardlike Zaur.

Lewis’ characters are complex: the same person might be both a hero and a villain, depending on who you ask; the heroes may have the most blood on their hands. The narrative is equally complex. Much happened in the first book of the trilogy, Grudgebearer, and Oathkeeper handles both the consequences of the first book as well as a slew of new plots. The tension comes mostly from intrigue and character development through most of the book, but the action definitely kicks up at the end and leaves the reader with tantalizing cliffhangers.

Slavery and the abuse of power is a prominent theme in the novel, as well as hatred and forgiveness. Lewis gives no easy answers; innocent bystanders are still guilty for not standing up for what they knew to be right, but unforgiving hatred, even by a wronged party, is also questioned and judged. His analysis is intelligent and balanced, and it doesn’t muddle the narrative or get in the way of the fun. Lewis also considers gender issues. His race of plant people are a matriarchal society, and their boy-type people considered more decorative than useful in a crisis, inverting the prejudices of our patriarchal culture. The lizardlike Zaur naturally cycle through genders, females being removed from power and relegated to breeding stock.

The one major drawback to the book is the deluge of names; many characters have sentient weapons or armor, and each weapon and suit of armor has a name. While certainly logical given the nature of the world, it can be more than a little disorienting at times, and even readers who have just finished the first book of the trilogy may wish the publisher had included a compendium of names in the back. Still, Oathkeeper is definitely a good read for any high fantasy lover: the world Lewis has created is vibrant, unique, and diverse.