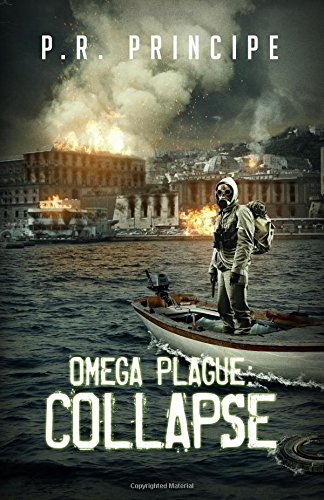 Bruno Ricasso is a police officer or Carabiniere, on the island of Capri. While it’s not the most exciting job, Bruno is pleased with where he is and has high hopes for his future. When rumors of a new and deadly virus erupting in parts of Europe arise, Bruno and his colleagues take it in stride. After all, they’ve dealt with this before with ebola and bird flu – they are certain that this is just another panic over nothing. However, when the virus keeps spreading and the government wants to take away legally issued guns from citizens, Bruno knows something is up. Soon, the new disease, HAV, is taking over Europe and the rest of the world. Released for chemical warfare, the disease kills most and turns survivors into psychopaths. The disease spreads quickly and soon life on Capri is almost obliterated. Declining to flee, Bruno opts to stay at his home, hoping for safety until things calm down. Safety, however, is not to be found. With most of the government collapsed, looters and criminals soon roam free. After he goes to the hospital to search for his sister – a high-ranking doctor who is helping with the government’s response to the vaccine – he finds that the government is just as deadly (and less merciful) than the virus itself. Bruno realizes that he cannot hide on Capri for long and soon takes a chance in Naples – what’s left of it – to find a last chance for a cure and for salvation.

Omega Plague: Collapse by author P.R. Principe is a delightfully compelling novel. Bruno is written as an everyman: not the smartest, not the bravest. He makes mistakes, is afraid to own up to them and generally goes with the flow. This slowly starts to change as the virus starts spreading. Initially, Bruno refuses to leave his post on Capri despite being the only Carabiniere left on the island. This isn’t because of bravery – it’s because they can see Naples burning and he knows things are worse on the mainland. After his sister’s brutal death, Bruno realizes that he cannot just go with the flow anymore. If he is going to have any chance of survival, he must take action. It is a nice character arc for Bruno – the reader sees him change from coward to broken but brave man who is willing to be honest about who he is and risk his life for others. The supporting characters in the book are also well written, from the devious friend Cristian, the man he befriends, DeLuca, the old priest Father Tommaso and his sister Carla. Each character is memorable and each is significant in Bruno’s story.

The setting for the book is picturesque and the reader gets a solid image of the island both before and after the virus starts. The beautiful setting makes the virus, looting and destruction of the landscape even worse than it would in a more industrialized city. The reader feels Bruno’s sadness and almost tangible despair as he watches everything crumble around him. The story moves along at a good pace, but this is also not a book that should be rushed. The writing and the story encourage the reader to savor the experience. Omega Plague: Collapse is a fantastic novel that readers of thrillers will really enjoy.