The Kindred Chronicles: Between Two Worlds by D.A. Chan 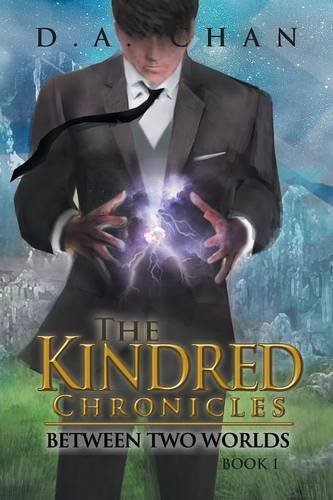 When Chris Sayther first sets his eyes on Elline Dawnsen, all he sees is a pretty face and a girl he would die to go out with. Little does he know that on his first date with her, he will die. However, despite his initial appearance of humanity, Chris becomes Kindred after his first death and joins Elline and her father in Demos Geras, the city of the Kindred. There, Chris learns that Elline’s father is the leader of the Dawnbringers, a ruling family within the city, and that in order to survive as a member of the Kindred, he must swear his allegiance to the Dawnbringers. However, war looms over Demos Geras when Cerulean, a traitor, concocts a plan to destroy the ruling houses. While facing new responsibilities as one of the Kindred and stopping Cerulean, Chris finds himself falling even harder for Elline, who out of duty to her family is betrothed to the Magister of Demos Geras. For the Kindred, a marriage between Elline and the Magister might prove to be the saving grace in a destructive war. With imminent danger ahead, will Chris choose to pursue his love for Elline and risk the end of the Kindred or will he choose what is right?

An interesting summary does not always promise an interesting novel. The concept of Between Two Worlds, however, is rather innovative as a combination of the fantasy and romance genres with a hint of political drama. As a character, Chris Sayther remains rather static and fixed as a love-struck fool whose inability to think with his head instead of his heart, causes many conflicts. In addition to this, Chris’ character takes sudden immortality with unexpected ease rather than shock or disbelief. Additional characters are cemented within their roles and generally remain static throughout with only small amounts of dynamic change.

Only after several chapters does the novel begin to develop a cohesive flow. The first few chapters lack context making the plot a bit difficult for the reader to decipher. By narrating the story “time-jumps”, the plot lacks a unified, cohesive feel. However, Chan does add interesting qualities to this novel: the language of the Kindred, and the entire world of the Kindred that runs parallel to that of the humans. By creating a language for the series, Chan developed a believable world that has a culture, which could be explored in depth. Although the idea of “paranormal” beings living side-by-side with humans is not a novel idea, The Kindred Chronicles changes the concept by focusing the setting and characters within the world of the Kindred rather than in the human world.

Fans of the fantasy, or even science fiction, genres, may find this novel to be a worthwhile read. While this novel does leave some things to be desired, it holds promise as the beginning of an entertaining series.