The Princess and the Pony by Kate Beaton 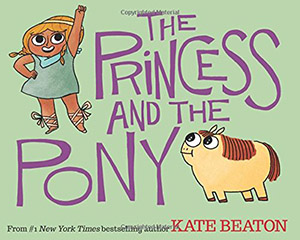 The Princess and the Pony, by Kate Beaton, tells the tale of Princess Pinecone who dreams of growing up to become a ferocious warrior princess someday. For her birthday, she asks her parents for a big, fast, strong horse – one that a true Viking warrior would proudly ride into battle. Unfortunately, her parents muddle up the request, and Pinecone finds herself saddled with a fat, little pony that does not meet any of her warrior standards. Princess Pinecone is determined to train her pony to be the warrior horse of her dreams, though things don’t exactly go according to plan. In Beaton’s story, readers learn of the determination in achieving one’s goals, while discovering that negative qualities in others may have positive sides to them as well.

The moment it was announced Kate Beaton was writing a children’s book, it’s doubtful that anyone was surprised. It just made sense. Beaton has been writing and illustrating her popular online comic, Hark! A Vagrant, for eight years now, and she just had her first book published in 2011, with a second one on the way this September 22nd. As already stated, a kid’s book is no surprise when it comes to this talented writer and illustrator. While Beaton’s Vagrant comics tend to feature in-jokes on classic literature, acclaimed writers, historical figures and events, and even Broadway musicals, there’s a sense of silliness and ridiculousness found in almost every single one of her panels – a perfect tone for any kid’s book.

The story in The Princess and the Pony is all around great, especially in the realm of representation. For starters, the protagonist is a young girl, a person of color, and has varying interests – she wants to be a fierce warrior, wears ballet slippers and cozy sweaters, and has a room filled with action figures, weapons, and books. Princess Pinecone is not a one-note character, as so many young girls are depicted in books. She is allowed to enjoy both stereotypical male and female interests, because that is how normal little girls work. Then there is the entire cast of background warriors, who all vary in gender, shape, and race. Representation is clearly a factor Beaton takes into account; something children’s books seem to be doing much better with over the years (thank goodness).

As for the book itself, what else can be said? It’s incredibly funny, well written, and the art is great – all very much in Beaton’s well known repertoire as an artist. The book has good morals packed into it: accepting friends, embracing all sides of personalities, and seeing flaws in others as positives. Did this reviewer mention that the book is also extremely funny? Well, here’s a repeat, in case it was missed the first time: it’s really, really funny.

This is one of those rare books that not only children will enjoy; parents who read it to their kids will get a kick out of every page as well. A simple must for any bookshelf – youth, elderly, middle-aged, college student, it doesn’t matter. Age should not prohibit anyone from such a delightful treat as The Princess and the Pony.