The Right Way to Lose a War: America in an Age of Unwinnable Conflicts by Dominic Tierney 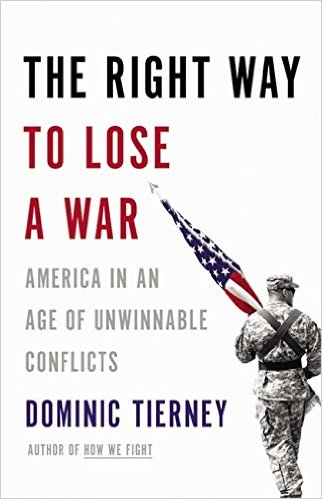 For a long, long time, America never lost a war. Mostly due to overwhelming force and the indomitable will and support of the American people. For a while now, this has no longer been the case. Korea, a long slog to a draw; Vietnam, a longer, even deadlier and divisive struggle ending in thinly disguised defeat; Afghanistan and Iraq where the results are still out, neither clear cut nor encouraging. What happened and how can we do better as more conflicts arise?

Dominic Tierney is an associate professor of political science at Swarthmore College and has a PhD in political science. He is an award-winning author of three other books on warfare and now,

For the purposes of the book, you can divide history into two eras: before World War two and after World War Two. Before Korea, The United States had not lost a war. Afterwards, as mentioned above, we haven’t had a clear-cut victory. We won many battles, but have not converted them to victory.

After WWII, the victors divided the spoils to suit themselves and we are, and will be, dealing with countries either made out of whole cloth, like Israel, or divided willy-nilly into chunks, having no regard for ethnicities, religious differences, etc. The result is sectarian conflict, armed insurrections, and attempts to regain territory and old glory: A veritable stew of instability.

Mr. Tierney’s solutions: 1. Be sure the war in involves U.S. interests. 2. Determine what level of commitment is needed. The three options are: A. surgical strike: using great force followed by rapid withdrawal. B. Ugly stability where the violence is still present, but tolerable, and C. The beacon of freedom, which we attempted in Iraq, to our sorrow. A fourth, in case of a true battlefield fiasco is to cut and run. No explanation needed.

For all of these, perhaps the most important consideration is the exit strategy. Iraq is a good example of that recommended by the author. That is surge, talk, and leave. Deploy enough force to temporarily improve your battlefield position, use the advantage to leverage talks, and leave with the best situation you can achieve.

Those are the basics. The book covers all of the historical examples and all the various permutations of future conflicts and how to handle them. As stated earlier, this reviewer thinks the author has done an excellent job and if it gets the attention it deserves, and lands on the desks of the right people, America may avoid future quagmires.