The Shiva Syndrome by Alan Joshua 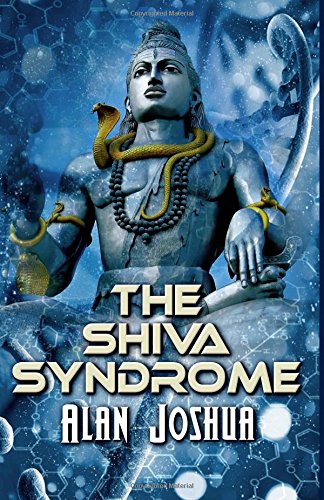 “People only see and know what they’re conditioned to accept. If it doesn’t fit that ‘reality,’ it’s rejected.”

What a fascinating book! It’ll magnetize you just like the penetrating gaze of Hindu’s god Shiva and his animal companion on the book’s cover, although the relation of this god of destruction and creation to the book’s topic is symbolic. The SHIVA Syndrome is a sci-fi thriller, a mystery that unfolds on a background of myths and religions, biotechnology, military power, politics, and paranormal human abilities. Here SHIVA is an acronym of a highly secret research project in which psychologist Beau Walker, who is dealing with his own demons, has been practically forced to participate. Surprised by the fact that this mind research is based on his own scientific prediction, he is eager to discover what has led to a devastating catastrophe that has happened in a similar Russian research center. This shattering cataclysm has wiped from the earth not only the whole city with its thousands of inhabitants but disturbed and destroyed other locations and objects on the planet, and has even done some damage in space. Walker isn’t the type to fervently work on any edged project just to satisfy his scientific curiosity.

Walker quickly understands that the research he is involuntary involved with is not only morally, but also ethically questionable. Moreover, besides developing new technologies in highly lethal weapons of warfare, the SHIVA’s facility scientists are also trying to use the human mind as a deadly device. To prevent another disaster from happening Walker goes beyond our known reality. Furthermore, the matter of “reality” in this book is questionable. Even the name of the novel’s author isn’t real – Alan Joshua is a pseudonym of a Clinical Psychologist whose main interest is focused on studying Parapsychology. The author’s profound knowledge of this field is shown in the extraordinary development of the story. The descriptions of events and characters are very vivid and engaging. Having the right amount of adventure and romance this crisscrossing genre tale isn’t just a good read, but may also look great on a big screen.