The Ultimatum: A Jeremy Fisk Novel by Dick Wolf 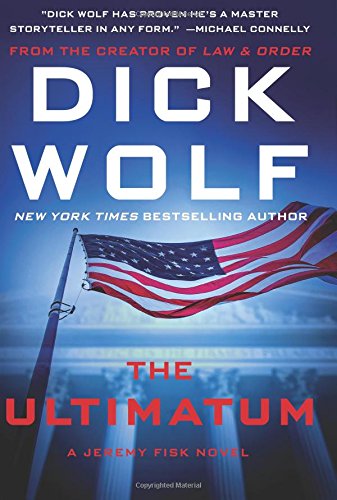 Jeremy Fisk is a New York Police Department intelligence division officer near the top, but not elevated enough to not have to defer to his superior’s de rigueur interference and occasional ineptitude. He is their James bond type, which is proven by his uncanny awareness and good shooting when he escapes assassination by the cartel.

Otherwise, he is beset on all sides by an angry genius who vows to kill one innocent each day until the treacherous whistleblower who downloaded thousands of secret files is released. There is another cartel assassins out there, and to top it all off, he’s saddled with the presence of a female reporter who is in possession of the stolen files, but won’t reveal their location. She is supposed to “shadow” Jeremy’s investigation. He doesn’t appreciate it, even though she is pretty and smart. He lost his wife sometime in the last book, so he is vulnerable and… Do you sense a pattern here? As you might imagine, (spoiler alert) everything turns out all right in the end, and it can’t come too soon.

Dick Wolf is a television producer, so I guess it’s not surprising that the book has a television flavor. Mr. Fisk is really not given much to do; most of the planning and organizing of the operations must be done elsewhere because they are not given much attention in the narrative. The action scenes are not terribly exciting and the explosive ending would make a good visual, but is an unlikely and clumsy finish to the book.

Too much of the book is given over to descriptions, not only of the author’s inside knowledge of the New York scene including clothing, with prices paid, but also endless descriptions of spyware, both soft and hard. In fact, the book would have been improved immensely by a glossary of the aforementioned hardware, software, and agencies employed in the tedious hide and seek on the part of the villains and heroes alike.

If you’re not too demanding, it’s a pleasant enough read, but it would make a better television show.