They Came in Twos by Guillermo Machado 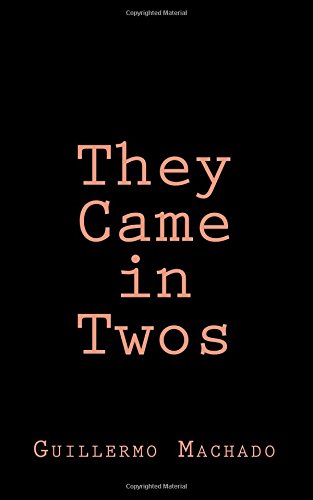 Should one watch Guillermo del Toro’s Pan’s Labyrinth and Frank Miller’s Sin City, one would be ready for Guillermo Machado’s epic novel, They Came In Twos. More than just blending film noir with a solid dose of magical realism, Machado paints a detailed picture containing a vast (yet not overwhelming) cast of usually sordid characters with a poetic style that compels one to continue turning each of the book’s 552 pages.

That comparisons can be made to movies is no coincidence. Since 2000, Machado has written twelve feature-length screenplays, and it shows in this book. Machado’s style of writing allows the reader to picture exactly what he describes. While at times labored, at least initially, the writing is as visually rich as a Courbet painting, precluding one from simply scanning the sentences.

Set during the Prohibition era, one is dropped into the mythical town of Good Leaf (think Gotham City) with no other geographical clues other than lots of low-rent districts, run-down buildings and being next to a major body of water. Complete with rival rum-running gangs, G-men, a corrupt police force, speakeasies and clubs, Machado presents us initially with scenes reminiscent of the true-to-life, gritty crime novels once pioneered by Dashiell Hammett and James Cain, complete with an impressive command of the vernacular of the times, which is not an easy feat.

The book is divided into five parts. In Part I Machado introduces us to the key cast of characters, often in a way that reads like a rap sheet from the DA’s office. One can almost hear Sam Spade’s voice. Machado’s inner Sam Spade then morphs into something very different. In this Sodom of moral relativity that is Good Leaf “Each man’s life was arbitrary, and justice was as relative as his position in time and space,” (p.371) we are introduced to two, very different, “unworldly” characters. The cognitive dissonance produced by this sudden disruption in the narrative thread is likely intended, yet it compels one to read with even greater anticipation.

These “unworldly” characters are Buster Horn and Mr. Crooner, AKA, John Henry. Without revealing too much of the plot, Buster represents purity, innocence and unconditional love in a place of unredeemable deceit, danger, and death, where not even blood relation prevents treachery for trinkets. The reader’s compulsion is now to determine who will have the greatest impact on the other. Buster’s immediate influence on Pazo “Pap” Fanti (perhaps a bit too immediate) leads us to believe that love and compassion can flourish in even the direst of environments. Yet will this lone prince of peace survive against the onslaught of malignity?

And what of Mr. Crooner? Mr. Crooner tells us that even flawed angels are not beyond redemption.

Machado touches on difficult subjects like domestic violence and even abortion, but without evangelizing.

Every character is deeply flawed and Machado avoids ending the story with the oft-used cliché of perfecting the inherently flawed. Yet he does present the message that love and transcendence of evil can find its way into even the deepest, darkest and narrowest crevices of the human condition. That he does so combining elements of film noir and magical realism only makes the novel that much more vivid and entertaining.