A Snicker of Magic by Natalie Lloyd 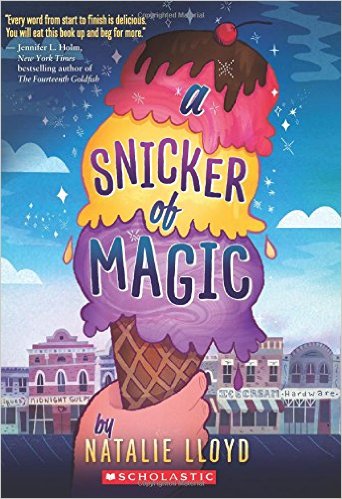 Felicity Pickle is twelve years old, and she collects words. Not only does she write poems, and improvise them on the spot to entertain her little sister, Frannie Jo, but she also sees words everywhere: floating around people, glowing on the walls of buildings, and shimmering in the sky. When her always-wandering mother moves the family back to her hometown of Midnight Gulch, Felicity meets other people who have special powers, both magical and mundane, including a boy her age named Jonah, who does anonymous good deeds for the townsfolk as his alter ego The Beedle.

She also learns of the history of Midnight Gulch, which involves two dueling brothers who play beautiful music, a hot air balloon, weather with a mind of its own, and ice cream that literally makes people feel things. In Midnight Gulch everyone has some kind of inherent power, even if it’s just a supernatural talent for fixing cars. Felicity becomes determined to use the little snicker of magic left in Midnight Gulch to get her mother to settle there, once and for all.

As can be expected from a book about a girl who collects words, the language in A Snicker of Magic is stunning, and usually not in an over-the-top way, but in a way appropriate to a twelve-year-old girl who appreciates the beauty in everyday life. On occasion the prose does get a little twee, but more often than not it’s lovely, simple, and sometimes hits upon a truth of grown-up life that’s somehow even more poignant from a twelve-year-old’s perspective.

From the first pages of the novel, the setting of Midnight Gulch evolves as its own character, with its own mysteries. The words that Felicity sees around people and buildings in the town hint at its deeper secrets, and through her explorations Felicity slowly unravels the truth about the town, and herself, and it’s a fascinating journey that we accompany her on.

In addition to her facility with language, Lloyd has a knack for creating likable and non-stereotypical characters and showing them through a twelve-year-old’s eyes. There is Felicity’s long-lost uncle Boone, a heartbroken bluegrass singer; the poet Florentine and her “bag of burdens” she must carry, which is perhaps a kid-friendly metaphor for depression or other grown-up problems; Jonah’s mother who is a manicurist/mechanic; and even Felicity’s little sister, Frannie Jo, manages to be a realistically cute six-year-old kid without being overly precious or irritating, a feat rarely carried off in young adult fiction.

Then there is Jonah himself, the perfect friend to Felicity in her new town. Admittedly, Jonah’s appearance in her life seems a bit contrived, and at times he is a bit too perfect and not enough of a real twelve-year-old boy who makes mistakes and is still figuring out how to talk to girls. However, Jonah is a wonderful example of a kid in a wheelchair, without that being his defining character trait or even important to him at all. At times it does necessitate that he ask friendly adults for help in his do-gooding expeditions, but he has plenty of initiative of his own, and after a few pages you forget he even has a wheelchair, which is as it should be.

His relationship with Felicity also never treads the cliché path of puppy love, which is also refreshing for an opposite-sex friendship in a young adult book. Felicity says she doesn’t have a crush on him, but an “inflate” — she feels lighter and buoyed by his friendship, not “crushed” at all. Jonah convinces Felicity to get over her fear of public speaking and share her poems with people, convinced that this will somehow break a magical curse on Felicity’s family.

But in the end, Felicity is acting on her own behalf. She comes up with a creative idea that she thinks will convince her mother to stop moving her and her sister from place to place and settle in Midnight Gulch. Is it magic that ends up solving Felicity’s problems, or is it just the power of words? Maybe those two things really aren’t so different after all. For young people who are just beginning to build their own collections of words, A Snicker of Magic will be a magical book indeed.