An Unusual Island by D.L. Finn 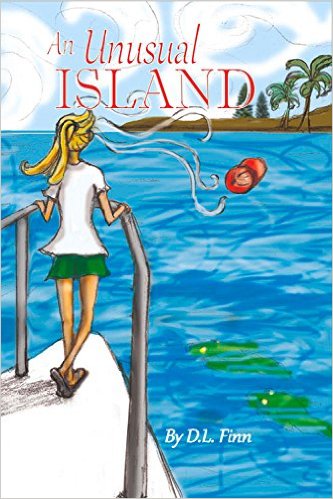 Janine Baseli has always been different from the rest of her family, even from her twin brother, Justin. While they love boating, water sports, and any outside adventure, she has always preferred baseball, books, and friends. When the family wins a trip to a tropical island, Janine is ecstatic at the thought of catching up on a mountain of books. Her plans go awry, however, when the family decides to take a boat trip for a few days. Janine tries to make the best of it, but things go from boring to bad when they get caught in a storm and end up running aground on an uncharted island. This is no ordinary island, though: it’s made up of bird-people and wonders like extinct animals that can speak telepathically. Despite the appearance of perfection, Justin and Janine soon discover that there is dissent in paradise. The inhabitants have divided themselves into two factions: those who want to remain on the island in peace and those who want freedom. Justin and Janine find themselves caught in the middle as the only two people who can decide the issue. They must choose before it is too late for the island and for their family.

An Unusual Island by author D.L. Finn is quite an unusual story. In the book, the author creates a world that is fantastical yet feels real at the same time. The characters, too, have nice surreal moments in which they find themselves experiencing both the familiar and the mystical at once. The island itself is a place of dreaminess, and the reader feels as if they are on the island with the characters. The character of Janine is nicely written and her feeling of outsider status within her own family comes across nicely and in an endearing way. The other characters, including her brother Justin and the bird-people, are likewise well written. The animals in the book were particularly delightful – they were vivid, individualized, genuine characters. The plot unfolds nicely, with the twins unveiling new information as they learn and explore more of the island. Their sense of foreboding grows as they learn more and are further drawn into the conflict between the island’s inhabitants. One of the most successful things in the book is the atmospheric mood throughout. Initially, the island feels peaceful, sleepy, and safe. As the book goes on, it begins feeling darker, mysterious, and threatening. The island is truly its own character in this book. Overall, An Unusual Island is a solid adventure/fantasy book that will capture the imagination of its readers.