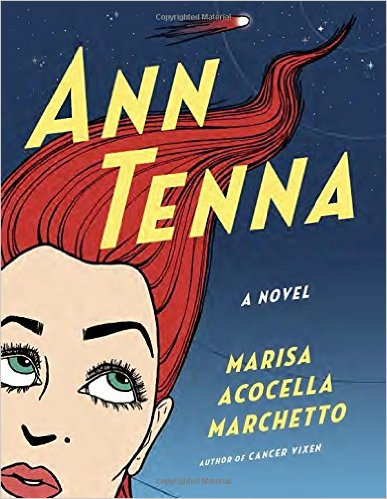 Ann Tenna, written and illustrated by Marisa Acocella Marchetto, tells the story of Ann Tenna, one of the world’s most famous style/gossip vloggers – the envy of the entire planet. Ann has everything she could possibly want from life: fame, a gorgeous fiancee, groveling fans, and an insane amount of power. On the night she’s supposed to win a Humanitarian award, things go awry. After begging the universe to kill her, Ann finds herself involved in a potentially fatal accident. Then, and only then, she is transported to another dimension to meet the superior, cosmic version of herself. Upon meeting her double, Anne begins to remember what she was initially sent to earth to do and must decide whether she will follow through or not – that is, if it’s not already too late.

Ann Tenna is all sorts of interesting, with a splash of obscure mixed in. As a whole, it works well enough. The art is, for lack of a better word, cool; it’s very stylized and fits quite well with Marchetto’s tale. As for the story, the writing gives off a heavy-handed message about humanity’s attachment to technology and obsession with self-involvement. Fair enough: there is definitely truth to those themes in today’s world. All the details of Ann’s earth life are over-the-top (people crawling after her in worship, cameras installed in her accessories, an assistant posting her vlogs as she films, etc.), thus highlighting an absurdist take on reality. Ann’s journey involves her examination of the life she’s led (taking a step back, apologizing to others, and attempting to better her own life and the lives around her), a clear message readers may take something away from.

Unfortunately, none of the characters in Ann Tenna are particularly likable, including Ann herself; even after her transformation in the second act, her prior self has already been cemented into readers’ brains. Audiences, while intrigued, may find it hard to care at times about what happens to any of the cast of this book. Then there is the cosmic realm examined in the last two thirds of the graphic novel. This setting is, well, odd. Ann teleports all around this new universe, seeing different sights that never quite seem to connect. There are also famous, long dead figures of both fashion and science popping into and out of scenes. While these historical people are useful for explaining where Ann’s been transported, while also speaking to her love of fashion, it’s a strange mash-up that doesn’t quite work. In the end, the other realm never feels fully explained. It is heaven? Another solar system? A different dimension? It seems to be up to readers to decide. Not to mention that the titular protagonist’s name is way too on-the-nose – antennas being a pretty prevalent part of the novel’s second act.

Once more, the word that best sums up Ann Tenna is “interesting.” While certainly not suiting everybody’s taste – what with the absurdity and heavy-handed message about humanity – readers shouldn’t shrug it off completely. It might be right up any someone’s alley.